A Manual of Parliamentary Practice. For the Use of the Senate of the United States. 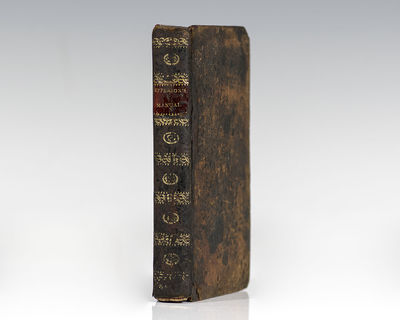 by Jefferson, Thomas
Washington City: Samuel Harrison Smith, 1801. First edition of the first American book on parliamentary procedure. Small octavo, bound in full contemporary sheep with red morocco spine label lettered in gilt, gilt tooling to the spine. In very good condition. Early ownership signature. Housed in a custom half morocco clamshell box. An exceptional example. As Vice President of the United States, Jefferson served as the Senate's presiding officer from 1797 to 1801. Throughout these four years, Jefferson worked on various texts and, in early 1800, started to assemble them into a single manuscript for the Senate's use. In December 1800 he delivered his manuscript to printer Samuel Harrison Smith, who delivered the final product to Jefferson on 27 February 1801. The Manual is arranged in fifty-three categories from (1) The Importance of Adhering to Rules to (53) Impeachment. Each section includes the appropriate rules and practices of the British Parliament along with the applicable texts from the U.S. Constitution and the thirty-two Senate rules that existed in 1801. In recent years, Jefferson's Manual has been cited to support the idea that state legislatures can initiate congressional impeachment proceedings. While precedent for an impeachment so initiated does exist, it still requires a direct proposition to impeach be made by a Member of the House, who may incorporate the communication of the legislature in his or her remarks or any impeachment resolution submitted to the House. (Inventory #: 104073)
$12,500.00 add to cart or Buy Direct from
Raptis Rare Books
Share this item