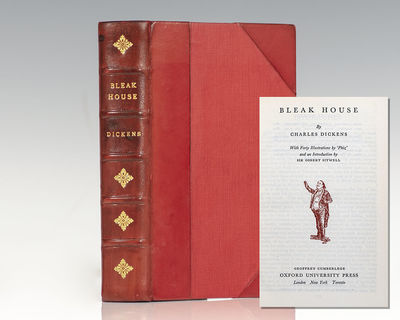 by Dickens, Charles
London: Oxford University Pres, 1948. The New Oxford illustrated edition of this Dickens classic. Octavo, bound in three quarters morocco by Zaehnsdorf with gilt titles and tooling to the spine in six compartments, top edge gilt, marbled endpapers, with forty illustration by "Phiz" including a tissue-guarded frontispiece and an introduction by Osbert Sitwell. In near fine condition. "In Bleak House for the first time [society] is seen as an absurdity, an irrelevance, almost a madness. A dark force from which the real people must escape in order to create another society of their own [Dickens] had been preparing for this novel all his life and, despite the calamities which had helped to provoke it in the first place, was even happy while he was writing it It might even be said that Bleak House cured the very malaise which was responsible for its composition" (Ackroyd, 649-50). "The Dickens cosmos, his phantasmagoric London and visionary England, emerges in Bleak House with a clarity and pungency that surpasses the rest of his work, before and after" (Bloom, 311). (Inventory #: 90457)
$350.00 add to cart or Buy Direct from
Raptis Rare Books
Share this item