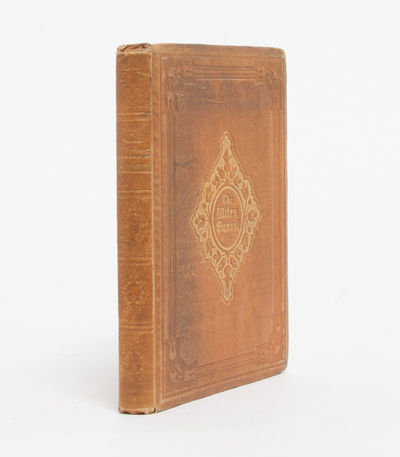 by [Women's Conduct] Calvert, William
London: Longman, Brown, Green, and Longmans, 1854. First edition. Original yellow publisher's cloth binding stamped in gilt and blind. All edges gilt. Red endpapers. Gentle rubbing to extremities largely concentrated to spine ends; corners bumped. Offsetting to front board. Hinges starting but sound. Contemporary ownership inscription of "Georgiana Trench. Oct 22 1854" in ink with "Harriet Trench" beneath it in pencil to verso of front endpaper. Small bookplate of American collector Albert A. Howard ("AHA") and bookseller's ticket of Leighton & Son to rear pastedown. Some light scattered foxing to margins but else clean and unmarked. Collating [4], 100, [2]: complete, including both half title and engraved title pages. A book notable for its typography and decoration, it is the first known example of the Basle Roman typeface, this being cut by William Howard for the Chiswick Press; illustrations engraved by Mary Byfield. In all, a charming copy of this etiquette manual containing poems and prayers for women, which OCLC reports at only 9 U.S. institutions.

Devotional poetry designed specifically to give comfort and guidance to women at key moments in life, The Wife's Manual acknowledges a surprisingly wide range of female experience. Some poems are as one would traditionally expect from a volume of this period. The Bride's Prayer and Wedding Song, for example, mark a woman's entrance to married life; For Her Husband, For Her Husband in Absence, and Prayer for Her Husband in Sickness lead into her marital duties; and For Her Infant and Cradle Song follow her into maternity. Yet there are more complex moments in a woman's emotional and practical life that the Manual also addresses. When Recovering From Her Confinement and On the Death of a Child, reveal the difficult realities of childbearing and loss. The Wife to Her Ruined Husband, After Angry Words, On the Estrangement of her Husband's Affections, and The First Hours of Widowhood similarly consider the trials and heartbreak that can come in a good or bad marriage. (Inventory #: 3011)
$1,075.00 add to cart or Buy Direct from
Whitmore Rare Books
Share this item