An Account of a New Comet. In a letter from Miss Caroline Herschel to Charles Blagden, M.D. 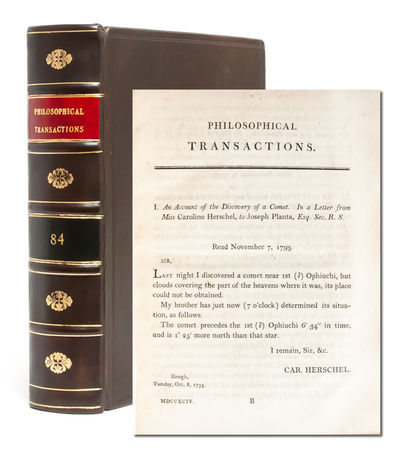 by Herschel, Caroline
London: Royal Society of London, 1794. First edition. Near Fine. From The Philosophical Transactions of the Royal Society (Part I, Volume 84): p. 1. Bound with Part II. Recently bound to style with gilt and red morocco label to spine. Some gentle rubbing to boards, else a tight, pleasing copy. Measures 216 x 165mm and collates vi, 168; [26, Appendix]; [v], [1, errata], 169-444 [7]: complete, including 21 plates. Some light scattered foxing and occasional offsetting from plates, but largely clean and unmarked throughout. Some margins shaved close, particularly near the headers, in Part II. Unrecorded by ESTC, this important early work by the first paid female scientist is recorded at only 2 institutions according to OCLC.

Educated from early childhood in fields including music, philosophy, and mathematics, Caroline Herschel's scientific career was born out of her collaborations with her brother William, who invited her to join in household in 1782. "I was to be trained for an assistant Astronomer," she reports, "I was to sweep for comets" (Lubbock). When William took a position as the royal astronomer at the court of Windsor, he hired Caroline as his professional assistant; and her annual salary of £50 made her the first paid woman scientist. Within a decade, she had developed into a leader in the field, becoming one of the first women ever to read a scientific paper at the Royal Society of London. The present is an early example of the works she presented in that setting, documenting the discovery of a new comet -- one of the eight that she would locate between the decade of 1786-1797. Her collaborations with her brother William Herschel in addition to her independent work contributed to the fame she enjoyed in her own lifetime, including a salary awarded to her by the King. "Among her contemporaries Caroline Herschel had become a legend...in 1835, she and Mary Somerville became the first women to be awarded honorary memberships to the Royal Society" (Ogilvie). Though she was barred from the kind of formal training and career recognition her male peers enjoyed, Herschel's discoveries helped her become an important foundational contributor in the field of astronomy. "The contributions of Caroline Herschel to the science of astronomy were considerable. As an observer, she added to the total of astronomical facts available to the scientist. Besides her eight comets (five of which can be properly credited to her), she located several new nebula and star clusters...her accuracy and perseverence have assured her a place in the history of science" (Ogilvie). The present work is an exceptional example of her meticulous study of the sky, providing the reader with exact locations and tracking the movement of her comet in 1793.

The present work appears in the 1794 Philosophical Transactions alongside three papers by her brother William Herschel, with which she would have assisted and contributed research despite lacking a by-line. Indeed, though women were not admitted to become fellows of the society until 1945, her work's appearance among luminaries in natural history, mathematics, physics, and actuarial science is a testament to the importance of her contributions.

The Adventures of Mickey Mouse

London : Printed for the Author and sold at her House in White-Harte Street , 1750
(click for more details about A Letter Humbly Address'd to the Right Honourable the Earl of Chesterfield)
View all from this seller>