Gems of Womanhood, or Sketches of Distinguished Women in Various Ages and Nations 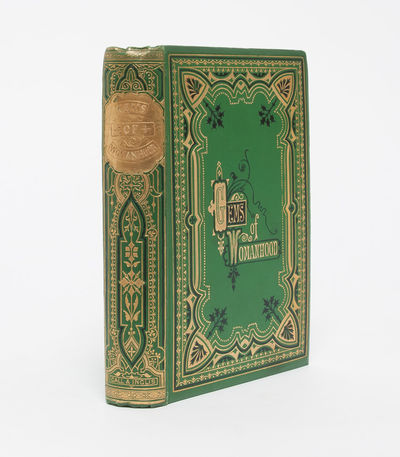 by Mossman, Samuel
London: Gall & Ingliss, 1870. Early edition. Fine. Original publisher's cloth binding ornately stamped in black and gilt to spine and boards. All edges brightly gilt. Yellow endpapers. Contemporary bookplate of Joseph Marriott to front pastedown, else unmarked with no signs of use. Light scattered foxing to preliminaries, with textblock largelysquare, tight, clean and untoned. An exceptionally beautiful example of a Victorian book emphasizing the importance of women role models and the variety of positions they held in society.

"In the history of the world, back to the remotest ages, there are passages at every stage of human progress which assert the influence of womankind upon the destiny of nations. Yet that influence seldom appears in a prominent position from being hid among the overwhelming events it has assisted in maturing. Nevertheless, it is acknowledged by the most eminent historians and biographers, that women have succeeded where men have failed, in developing some of the greatest chapters in history." So opens this lovely Victorian work, aiming to present "the rising female generation" a diverse group of women from which to learn and take as examples. Notably for the period, these women role models are not limited to those which satisfy the popular cult of domesticity. Rather, chapters on Heroines in Times of Peril emphasize women warriors and leaders, on Influence in the Political World focus on intellectuals and activists, and Contributors to Literature and Art showcase lasting, tangible cultural contributions. These are placed in context with chapters on women's role in the domestic sphere, and role models of filial duty. Unexpectedly progressive, the book gives ancient and contemporary women as inspirations for young girls. Fine. (Inventory #: 3144)
$475.00 add to cart or Buy Direct from
Whitmore Rare Books
Share this item

Indianapolis : Bobbs-Merrill , 1943
(click for more details about The Fountainhead)

New York : American Anti-Slavery Society , 1839
(click for more details about A View of the Action of the Federal Government in Behalf of Slavery (Association Copy))
View all from this seller>