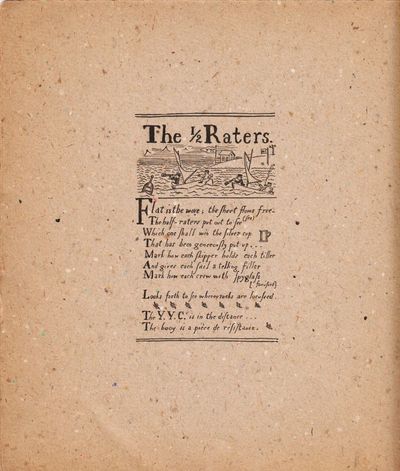 This is a fascinating collection of doggerel, probably composed by Yale student Gouverneur Morris, and illustrated by Raymond Moreau Crosby, who signs himself "MC." Each of the humorous poems and illustrations is about some aspect of student life at Yale, and each of the illustrations contains the iconic "bunch of grapes" or the "MC" signature, or both. According to David Richards's book on secret Yale societies, "Fox and Grapes" was a "third society" founded in the 1880s by Yale students who had been rejected by Skull and Bones and Scroll and Key. The fox-and-grape motif referred to Aesop's fable of sour grapes. There is a similar piece entitled "A Bunch of Grapes" that is fairly well-known (11 libraries holding copies), with several copies are available online. In that book Raymond Moreau Crosby's drawings are signed "RC." The book being offered here, however, is unknown. The drawings are in the same style as "A Bunch of Grapes" but they are signed "MC" rather than "RC". Crosby graduated Yale in 1898. I presume this piece pre-dates his graduation. One of the poems is about yachting, so I'm including it in this list. Very good condition, printed on heavy paper, in self wrappers. Rare. No copies on Worldcat or anywhere else that I can find. (Inventory #: 41160)
$250.00 add to cart Available from
Ten Pound Island Book Co.
Share this item