Hunting with the Eskimos: The Unique Record of a Sportsmen's Year Among the Northernmost Tribe. The Big Game Hunting, the Native Life and the Battle for Existence Through the Long Arctic Night. Signed By the Author 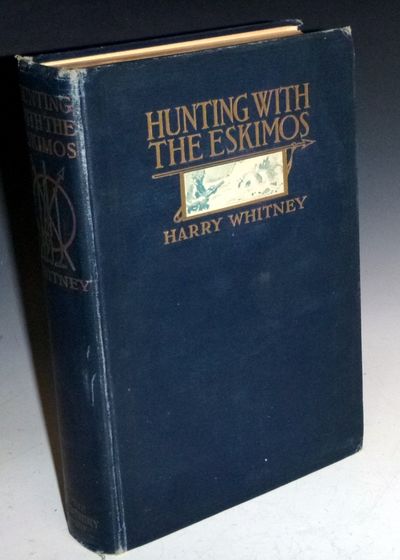 by Whitney, Harry
New York: Century Co, 1911. Octavo. 453 pages. Inscribed and signed by the author to R.R. Kingsley. The photographs were taken by the sportsman who spent a year hunting with a tribe of Eskimos. Photographs depict Whitney and the Eskimos on big game hunts and their daily struggles for survival in the rugged Arctic terrains. Harry Whitney (1873-1936) was a wealthy American sportsman, a descendant of the Eli Whitney family of New Haven, Connecticut. Whitney first traveled to the far northern Arctic for sport in 1908-09, on the ship carrying Robert Peary's expedition to the North Pole in the spring of 1908. While Peary and his rival Frederick Cook assaulted the Pole, Whitney hunted musk ox, polar bears, walrus, and other arctic game, and wintered over with the Inuit. In the spring of 1909 he encountered Frederick Cook, who claimed to have reached the Pole, and left some luggage in Whitney's care as he raced south to report his triumph. When Peary arrived later in the summer, he offered Whitney a ride home, but refused to bring Cook's luggage. Whitney thus became embroiled in the controversy over who achieved the Pole first, since Cook claimed his proofs were in the baggage. The original photographs from the book are in the Special Collections at the University of Chicago. Bound in dark blue cloth lettered in gilt, small illustrated pastedown mounted under title, spine gilt, corners bumped or worn through, light wear to spine ends, rear inner hinge is cracked but still holding quite well. (Inventory #: 027433)
$150.00 add to cart or Buy Direct from
ALCUIN BOOKS, ABAA
Share this item

The Lady of the Lake: a Poem in 6 Cantos

Edinburgh/London : Printed for John Ballantyne and Co., Edinburgh, and Longman, Hurst, Rees, and Orme, and William Miller, London, by James Ballant , 1810
(click for more details about The Lady of the Lake: a Poem in 6 Cantos)

Night and the Cat

by Coatsworth, Elizabeth and Foujita(illustrator)

New York : The Macmillan Co , 1950
(click for more details about Night and the Cat)
View all from this seller>