Hunting the African Elephant; An Anthology. (Limited and signed) 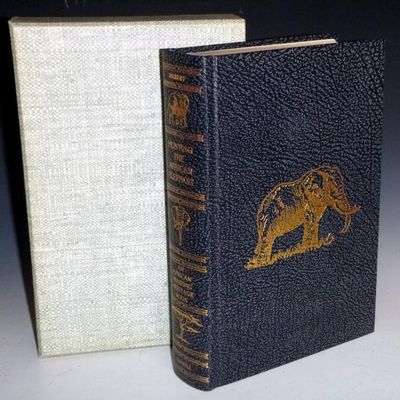 by Rikhoff, Jim
Clinton, New Jersey: Amwell Press, 1985. Limited Edition. Octavo. Limited to 1000 Copies, the present copy is #19 signed by the author Jim Rikhoff. xxiii, 688 pages. Foreword By Harry Tennison, original color plates and line drawings by Guy Coheleach. Articles by the finest writers on hunting in Africa. F.C. Selous "My First Elephant", Theodore Roosevelt "Elephant Hunting on Mount Kenia", Jack O'Connor "The Elephant" and many by W.D.M. Bell and others. The appendices show the balance between hunting and responsible preservation of the elephant. Appendix I; The Status of the African Elephant (1981) and Appendix II, Elephant Farming. Concluding with Tim Lithgow's Tembo. This is a book for both the hunter who has realized even under controlled situations the difficulty of the elephant hunt and for those, like this writer, who is a non-hunter but finds the accounts fascinating for the insights and raw feelings of the best writers whether it is F.C. Selous or Teddy Roosevelt. What is always of interest on these later books is the balance between the dedicated hunter and his awareness that preservation of the species of these magnificent animals is important. To disregard the latter, shows that the hunter has a streak that reflects a lack of conscience. A fine copy bound in pictorial gilt leather depicting an elephant in gilt, pictorial spine, lettering and all edges gilt, silk moire endpapers, housed in publisher's slipcase with some toning. (Inventory #: 027425)
$425.00 add to cart or Buy Direct from
ALCUIN BOOKS, ABAA
Share this item

A Book of Cats; Being Twenty Drawings

New York : Covici Friede , 1930
(click for more details about A Book of Cats; Being Twenty Drawings)

Boston : James R. Ossgood and Co , 1875
(click for more details about Queen Mary, a Drama)
View all from this seller>