A JOURNEY TO VENUS, THE PRIMEVAL WORLD: ITS WONDERFUL CREATIONS AND GIGANTIC MONSTERS.. 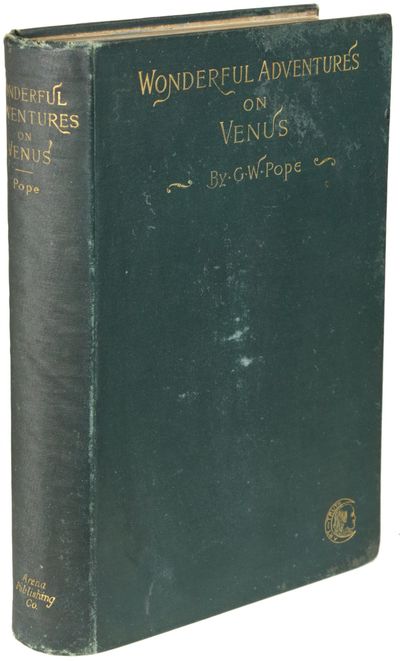 by Pope, Gustavus W.
New York: F. Tennyson Neely Publisher, 1895. Octavo, pp. [1-4] [1-4] 5-499 [500: blank], 16 inserted plates with illustrations by Miss Fairfax and Mrs. McAuley from drawings by the author, original green cloth, front and spine panels stamped in gold, white endpapers with floral pattern printed green. First edition. A later issue of the first edition with the "Arena" imprint on the spine panel and a cancel title page with Neely's imprint. This novel, the second and last of Pope's projected "Romances of the Planets" series, was first published by Arena Publishing Company in 1895. Arena issued the novel in two forms, in cloth with sixteen inserted plates, and in paper with three inserted plates. Neely acquired the Arena sheets (and some clothbound copies) and reissued them with cancel title pages. Although sixteen was the full compliment of plates for the copies bound in cloth, many of the hardbound copies issued by Arena and reissued by Neely have fewer inserted plates, generally three, but sometimes two or four. This copy has all sixteen plates. About 1897 Neely reprinted the novel on cheap pulp paper stock as a 25¢ paperback with two inserted plates. In Pope's sequel to JOURNEY TO MARS ... (1894), the protagonist and his Martian princess visit Venus, a younger world comparable to some stage of earth's prehistory. Anatomy of Wonder (1976) 2-127; (1981) 1-139; (1987) 1-76; and (1995) 1-76. Bleiler, Science-Fiction: The Early Years 1806. Clareson, The Emergence of American Science Fiction: 1880-1915, pp. 202-03. Clareson, Science Fiction in America, 1870s-1930s 628. Locke, A Spectrum of Fantasy, p. 177. Locke, Voyages in Space 163. Bleiler (1978), p. 160. Reginald 11815. Wright (III) 4305. Cloth lightly worn at spine ends and corner tips, spine panel age-darkened, some scuffing to cloth and some spotting on rear panel, inner front hinge crudely repaired, inner rear hinge cracked but quite sound, fore-edges of free endpapers chipped (the pulp paper used for endpapers are delicate), small Junior Red Cross sticker affixed to front free endpaper, the text block (also printed on pulp paper) is in pretty decent shape, except for the last leaf which has a chip from the upper fore-edge margin (no loss of text), a sound, good copy. This book is seldom found with its full compliment of sixteen plates, most of which depict the exploration of Venus and its flora and fauna. (#164535) (Inventory #: 164535)
$1,500.00 add to cart or Buy Direct from L.W. Currey
Share this item
L.W. Currey Inc.
Offered by