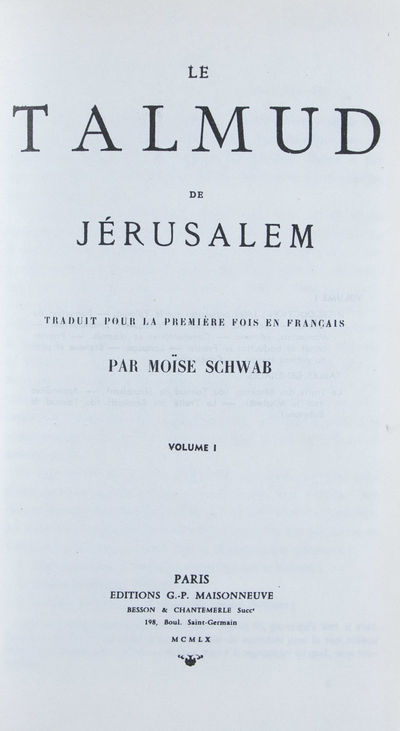 by Schwab, Moïse (Translated for the first time into French by)
Paris: G-P. Maisonneuve, 1960. Later edition. Hardcover. vg. Large octavo (8 3/4 x 5 1/2"). clxxii, 560pp (Vol. 1); xii, 436, iv, 396pp (Vol. 2); viii, 312, iv, 332pp (Vol. 3); iv, 356, iv, 352pp (Vol. 4); iv, 300, iv, 300pp (Vol. 5); iv, 300, iv, 312, [2]pp (Vol. 6). Original glassine over full cloth, with cream lettering to spines and front covers. Originally published between 1871 and 1889, this French translation of the Jerusalem Talmud is a collection of Rabbinic notes on the second-century Jewish oral tradition known as the Mishnah. Sporadic closed tears and chipping to glassines. Text in French. Glassines in overall fair, bindings and interior in very good condition. About the translator: Moïse Schwab (1839-1918) was a French librarian and author who was educated at the Jewish school and the Talmud Torah at Strasburg. From 1857 to 1866 he was secretary to Salomon Munk; then for a year he was official interpreter at the Paris court of appeals; and from 1868 was librarian at the Bibliothèque Nationale. In 1880 he was sent by the minister of public instruction to Bavaria and Württemberg to make investigations with regard to early Hebrew printing-presses. His most important work is "Le Talmud de Jérusalem," which was commenced in 1867 or 1868, before the appearance of Zecharias Frankel's Introduction or of the special dictionaries of the Talmud. The first part appeared in 1871 and was well received, although the critics did not spare Schwab. He then sought the cooperation of the leading Talmudists; but he was unsuccessful and had to complete the work alone. (Inventory #: 46196)
$450.00 add to cart or Buy Direct from
Eric Chaim Kline Bookseller
Share this item