Life at the Marmont 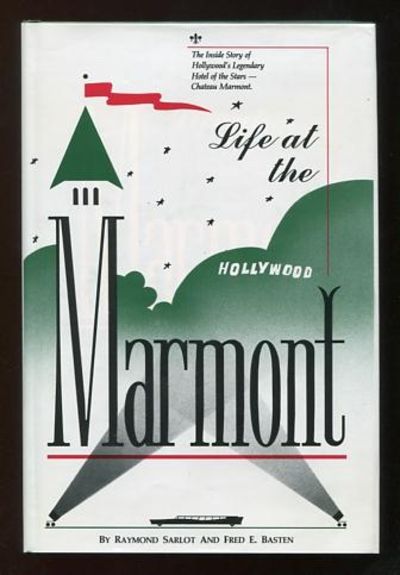 by Sarlot, Raymond R., and Fred E. Basten
Santa Monica CA: Roundtable Publishing, Inc.. Fine in Fine dj. 1987. First Edition. Hardcover. 0915677237 . [a lovely copy, no discernible wear to either book or jacket; especially notable since the jacket is printed on very thin paper, and this one looks like it's been encased in a protective jacket cover from Day One, and has retained its as-new appearance]. (B&W photographs) Comprehensive history of the famed Hollywood hotel, which "reveals for the first time the secrets behind the walls of this legendary hideaway, [which] has seen the highs and lows, glamor and glitter, as well as scandal and tragedy. Among the many celebrities whose visits to the Marmont are recounted are Marilyn Monroe, Howard Hughes, Marlon Brando, Greta Garbo, Errol Flynn, Hedy Lamarr, Vivien Leigh, Judy Garland, Sidney Poitier, Diahann Carroll, Bette Davis, Burt Reynolds, Roman Polanski and Sharon Tate, Jim Morrison, Barbra Streisand, Warren Beatty, Bianca Jagger, Debra Winger, Joan Collins, Robert DeNiro and James Dean." (And John Belushi, who "checked out" while still on the premises.) A small bonus with this copy: two postcards are laid in (one a promo for the book itself, the other bearing an illustration of the Chateau by Ed Scarisbrick). . (Inventory #: 24909)
$100.00 add to cart Available from ReadInk
Share this item
ReadInk
Offered by

London : The Universal Press , 1931
(click for more details about Humour on the Rail)