PLAN OF THE WESTERN SEAT OF WAR 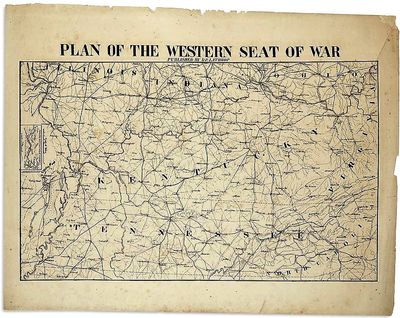 The map shows Kentucky, Tennessee, and portions of North Carolina, Mississippi, Illinois, Indiana, Ohio, Virginia; and an inset entitled 'Reduced Continuation of Missouri R.', which lists 'J. Manouvrier & Co. Lith N.O.' Towns, railroad routes, rivers are depicted.
"Jules Manouvrier arrived in New Orleans from Prussia at the age of twenty-two in 1838 and remained there until he died in 1875. In addition to views of prominent buildings, he lithographed maps and numerous pieces of sheet music" [Jumonville, Set to Music: The Engravers, Artists, and Lithographers of New Orleans Sheet Music 131]. During the summer of 1861, Manouvrier was producing $5 and $10 Confederate notes for the CSA Treasury Department. During shipment of the $10 notes to Richmond, some were stolen after packages broke open in transit. The CSA Treasury was forced to destroy the entire issue of Manouvrier $10 notes so as not to undermine public confidence in the Treasury. [Hughes, Brent: "The 'Most Wanted' Confederate Note", The Virginia Numismatist, Volume 6, Number 1, 1970, pp. 12-13.]
Parrish & Willingham 6180. Stevenson [Second Edition] 75.6. Crandall 3053. Not in Jumonville or Thompson. (Inventory #: 36323)
$3,000.00 add to cart or Buy Direct from
David M. Lesser, Fine Antiquarian
Share this item
David M. Lesser, Fine Antiquarian Books LLC
Offered by