REPORT OF THE COMMITTEE OF ARRANGEMENT FOR LAYING THE CORNER STONE OF THE NEW SYNAGOGUE OF THE PORTUGUESE CONGREGATION "MICKVE ISRAEL," MADE TO THE BUILDING COMMITTEE. TOGETHER WITH THE ADDRESS DELIVERED ON THAT OCCASION, BY THE REV. S. MORAIS, MINISTER OF THE CONGREGATION 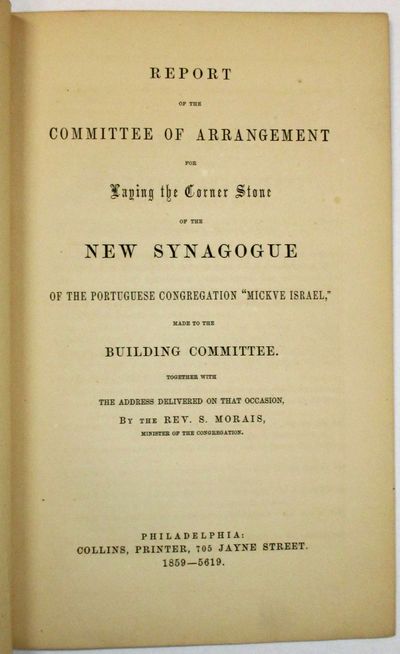 Mickve Israel [Hope of Israel], one of the oldest Philadelphia synagogues, was founded in the 1740s by Sephardic Jews. Known as the 'Synagogue of the American Revolution,' its early members included Haym Solomon and the Gratz family. Benjamin Franklin contributed to its first building fund. This was its third building, constructed on 7th Street, north of Arch. Isaac Leeser presided over the congregation from 1829 to 1850; Sabato Morais succeeded him. Morais was its Rabbi for 46 years.
The list of corner-stone and door-post purchasers included A.S. Wolf, who purchased the North door-post of the north door for fifteen dollars, in honor of H. Polock. Other luminaries of Philadelphia Jewry participated in the ceremonies. Wolf was treasurer and Gabay of the Congregation. Articles deposited in the cornerstone are listed, including newspapers, coins and tokens dated 1859, "A gold quarter dollar of California mintage, being deposited by Clarence A. Hart, aged 9 years." The Committee of Arrangement consisted of Edwd. S. Mawson, Joseph L. Moss, and Isaac J. Phillips. Rabbi Morais's discourse is printed. Morais, an abolitionist and founder of the Jewish Theological Seminary of New York, counsels, "If there be pride in us, if the vanity of exhibiting a more sightly structure than others possess, impelled us to designate this place as our future Synagogue...let us then bury first such unholy feelings in the bosom of the earth." Also printed is a prayer in Hebrew, composed by Morais.
Singerman 1593. OCLC 21968693 [6] [U PA, JTS, Yeshiva U, NYPL, Hebrew Union, Natl Lib. Israel] as of October 2019. (Inventory #: 36315)
$1,750.00 add to cart or Buy Direct from
David M. Lesser, Fine Antiquarian
Share this item
David M. Lesser, Fine Antiquarian Books LLC
Offered by