THE TESTIMONY: AN ADDRESS DELIVERED BY THE REV. ISAAC LEESER. NISSAN, 5611 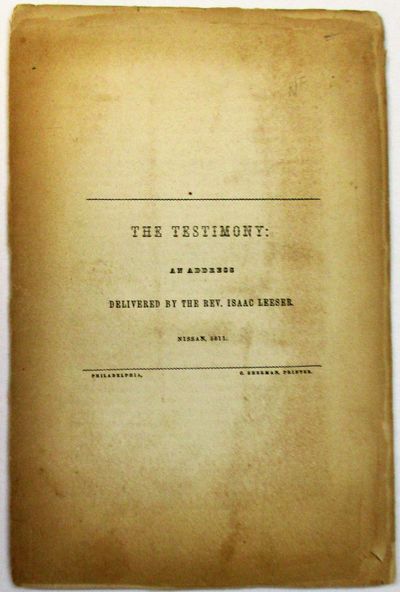 by Leeser, Isaac
Philadelphia: C. Sherman, Printer, 1851. Original front title wrapper, stitched. [2], 19, [1 blank] pp, lacking the rear wrapper. Toned, some shallow blank edge chipping and light wear. Good+, with some Hebrew printing in text. The caption title reads: 'An Address, Delivered at the Schoolhouse of the Hebrew Education Society of Philadelphia, at the First Opening of Their School, on Sunday, the 4th of Nissan, 5611, [April 6th, 1851,] by Isaac Leeser.'

"This address celebrated the opening of the day school launched by the Hebrew Education Society of Philadelphia, the first of its kind in the city. 'It has always been to me a subject of profound astonishment and deep regret, that there was not a single school all over the country, until very lately, where a Jewish child could obtain any information on his religion' [Swann Catalog, September 2019, Lot 120].
"Leeser was the driving force behind the founding, in 1846, of the Hebrew Education Society of Philadelphia, chartered for 'the establishment of a school or schools within ... Philadelphia, in which are to be taught the elementary branches of education, together with the sciences, and modern and ancient languages, always in combination with instruction in Hebrew language, literature and religion.' In his address at its official opening, delivered at the Society's schoolhouse on Sunday, the 4th of Nissan, 5611 (April 6th, 1851), Leeser expressed great hopes for the new Philadelphia Day School. 'We propose to combine elementary and afterwards scientific education with a gradual and progressive acquirement of Hebrew, Hebrew literature, and religion. It is not to be as in other schools, a secondary matter whether the children learn Hebrew and religion or not, but they are to acquire these even if nothing else can be imparted' (p. 12)." [Sotheby catalog, 2014, 09239-20].
Singerman 1195. Not in Goldman. OCLC 21968696 [5- JTS, U PA, AJHS, Hebrew Union College, Princeton] as of October 2019. (Inventory #: 36329)
$4,000.00 add to cart or Buy Direct from
David M. Lesser, Fine Antiquarian
Share this item
David M. Lesser, Fine Antiquarian Books LLC
Offered by