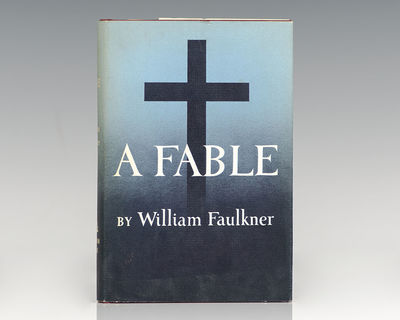 by Faulkner, William
New York: Random House, 1954. First edition of the first novel to win both Pulitzer and National Book Award. Octavo, original cloth. Advance review copy with a personal type-written letter from the publisher laid in addressed to Miss Belle Rosenbaum of the New York Herald Tribune. Near fine in a very good dust jacket. Jacket design by Riki Levinson. The Fable won both the Pulitzer Prize and the National Book Award in 1955. An allegorical story of World War I, set in the trenches in France and dealing ostensibly with a mutiny in a French regiment, it was originally considered a sharp departure for Faulkner. Recently it has come to be recognized as one of his major works and an essential part of the Faulkner oeuvre. Faulkner himself fought in the war, and his descriptions of it "rise to magnificence," according to The New York Times, and include, in Malcolm Cowley's words, "some of the most powerful scenes he ever conceived." Petersen A31b (Inventory #: 101232)
$500.00 add to cart or Buy Direct from
Raptis Rare Books
Share this item