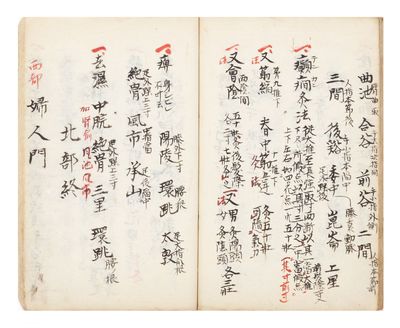 by ACUPUNCTURE & MOXIBUSTION
Two brush & ink drawings in the text. 89 folding leaves. 8vo (190 x 127 mm.), orig. wrappers (wrappers somewhat frayed), orig. stitching. [Japan?: mid-Edo]. A most interesting and extensive manuscript on acupuncture and moxibustion, divided into seven parts. Based on WorldCat and Kyoto University's manuscript with the same title, we can attribute the authorship of these texts to Chishin Tanaka, a physician of the early Edo period. The first four parts ("East," "West," "South," "North"; 17, 17, 25, 12 leaves, respectively) are devoted to general principles of acupuncture and moxibustion. In each of these parts, many symptoms and case histories are described in great detail along with their treatments through acupuncture and moxibustion. There are guides to locate the pressure points. Part Five (eight leaves) is devoted to female illnesses and their treatment. Menopause, vaginal discharges, irregular menstruation, breast cancer, difficulties during pregnancy and childbirth, abortion, etc., are all discussed. The sixth part, in three leaves, describes pediatric illnesses. The final section, of seven leaves, contains several "secret" methods, including the "bone length method," to locate pressure points. The two illustrations depict the spine and associated pressure points. In very good condition. (Inventory #: 6847)
$2,500.00 add to cart or Buy Direct from
Jonathan A. Hill, Bookseller
Share this item
Jonathan A. Hill, Bookseller, Inc.
Offered by