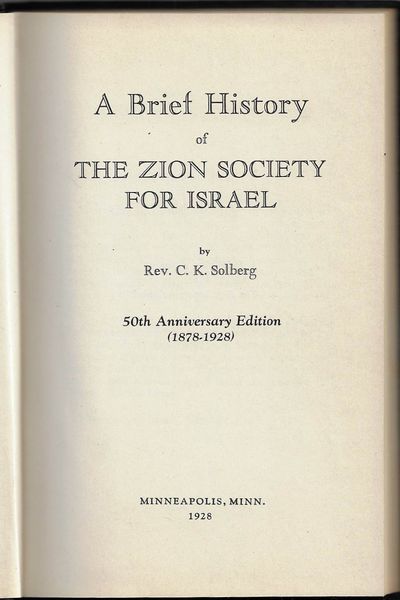 by Solberg, C.K. [Carl Knutson]
Minneapolis, 1928. First Edition. Hardcover. Fine. 158 pp, with many illustrations from photographs, including portraits and images of places, buildings, etc. Bound in black cloth with title stamped in green on upper board. Fine copy. No dust jacket, presumably as issued. The Zion Society for Israel was one of many nineteenth-century organizations dedicated to converting Jews to Christianity, but the first and only one to emerge from Scandanavian-American churches. It was founded in 1878 by two Norwegian Lutherans -- one from Wisconsin and one from Minnesota -- who "saw in the unfulfilled [Biblical] prophecies the bright future in store for the Jews and the sacred obligation resting upon the Church according to the Word of God." Although this missionary effort initially met with indifference or antagonism in many congregations, it grew slowly but steadily, expanding to include Swedish and Danish Lutherans. When this fifty-year history was published, members were fundraising for a $50,000 Jubilee Fund, to be dedicated to "building and equipping suitable mission stations in New York and St. Paul," and reporting (perhaps inaccurately) that "the attitude of the Jews towards Christianity has changed to a remarkable degree" and "the future prospects of Jewish missions are brighter than ever." (Inventory #: 20680)
$150.00 add to cart or Buy Direct from Walkabout Books
Share this item