What Others Think of the Salvation Army Colony at Amity, Prowers Count, Colorado. Being a Few Letters from Neighbors, Friends, and Visitors 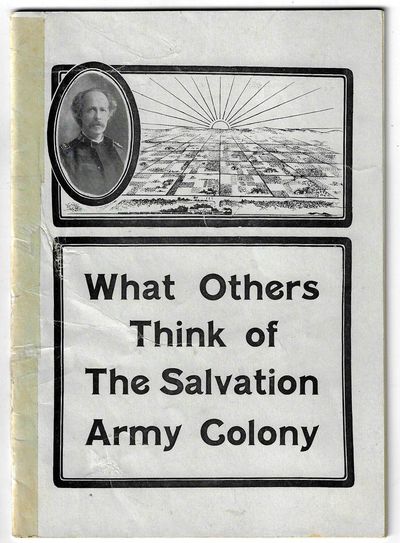 by [SALVATION ARMY]
1904. [31] pp, with illustrations from photographs, in original wrappers. Spine covered with archival tape, line in ink on the margin of one page, otherwise clean and sound. In 1898, the Salvation Army undertook a project intended to relocate urban working poor people to rural areas and enable them to become productive farmers. The idea for the project came from Salvation Army founder William Booth, who described the concept in his book In Darkest England and the Way Out (1890). General Booth's daughter, Emma, and son-in-law, Fredrick St. George de Lautour Booth-Tucker, took charge of the Salvation Army in the United States in 1896, and they took it upon themselves to put General Booth's plan into action. The plan was characterized by Frederick Booth-Tucker as an experiment in "domiculture," or the cultivation of families on family farms. The Booth-Tuckers appointed Col. Thomas Holland as the National Colonization Secretary, and together they chose sites in California, Colorado, and Ohio, for the colonies. (Source: Schemp, Fort Amity, An Experiment in Domiculture, 2011). The Amity colony was settled by thirty families from Chicago and Iowa, each of whom received ten acres of land, livestock, and tools. By 1903, the colony had 450 residents. In 1904, when this collection of testimonials was produced--presumably as both a fundraising tool and a response to naysayers--the project still seemed like it might succeed. That it did not (closing in 1909) was apparently not due to any failure in selecting worthy colonists, but because the Salvation Army officials had purchased land that was so alkaline that sustainable farming was impossible. Three copies located in OCLC. (Inventory #: 20638)
$250.00 add to cart or Buy Direct from Walkabout Books
Share this item

Boston, New York, Philadelphia, and Pittsburgh : E.A. Strout Company
(click for more details about The Great Peace Movement, Back to the Farm)

Journal of an Exploring Tour Beyond the Rocky Mountains, Under the Direction of the A. B. C. F. M. in the Years 1835, '36, and '37; Containing a Description of the Geography, Geology, Climate, Productions of the Country, and the Numbers, Manners, and Customs of the Natives: With a Map of Oregon Territory

Ithaca : Andrus, Woodruff, & Gauntlett , 1844
(click for more details about Journal of an Exploring Tour Beyond the Rocky Mountains, Under the Direction of the A. B. C. F. M. in the Years 1835, '36, and '37; Containing a Description of the Geography, Geology, Climate, Productions of the Country, and the Numbers, Manners, and Customs of the Natives: With a Map of Oregon Territory)
View all from this seller>