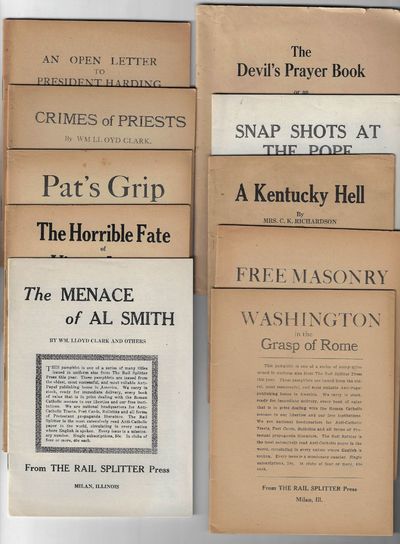 by [ANTI-CATHOLIC] Clark, William Lloyd, et al.
Milan, IL: Rail Splitter Press. Sixteen pamphlets in original wrappers, averaging around 40 pp each, some with illustrations; all in very good condition, most quite scarce. William Lloyd Clark was a venomous anti-Catholic who founded the Rail Splitter Press to publish tracts, handbills, and postcards elaborating his views and those of like-minded individuals. He proudly claimed to stock "every book of value that is in print dealing with the Roman Catholic menace to our liberties and our free institutions." The pamphlets in this collection cover the standard anti-Catholic tropes (lascivious and druken priests, politicians in thrall to the Pope, etc.) and also focus on specific political concerns -- among them President Harding's "betrayal of the Protestant cause" (by appointing Catholics to various positions within his administration) and the election of 1928, in which Democrat Al Smith was the first Catholic major-party candidate for President of the United States Titles include: Crimes of Priests; Washington in the Grasp of Rome; The Menace of Al Smith; The Devil's Prayer Book, or an Exposure of Auricular Confession as Practiced by the Roman Catholic Church, An Eye-Opener for Husbands, Fathers, and Brothers; The Open Door to Hell; Roman Oaths and Papal Curses; A Kentucky Hell; An Open Letter to President Harding; The Horrible Fate of Victor Lamar; Peoria by Gaslight; One Hundred Reasons Why I Left the Roman Catholic Church; Words of Wisdom; The Sad Story of Mary Lilly; Snap Shots at the Pope; Pat's Grip on the Government; and Free Masonry, The Open Door to Damnation, A Catholic Statement. (Inventory #: 20685)
$750.00 add to cart or Buy Direct from Walkabout Books
Share this item

The Voice of Truth

Navajivan Publishing House , 1969
(click for more details about The Voice of Truth)

Life and Times of H.H. Kavanaugh, D.D., One of the Bishops of the Methodist Church, South

Nashville, TN 1884
(click for more details about Life and Times of H.H. Kavanaugh, D.D., One of the Bishops of the Methodist Church, South)
View all from this seller>