Plutarch’s Lives. Translated from the Greek with Explanatory and Critical Notes from Dacier and others to which is prefixed, The Life of Plutarch; written by Mr. Dryden. 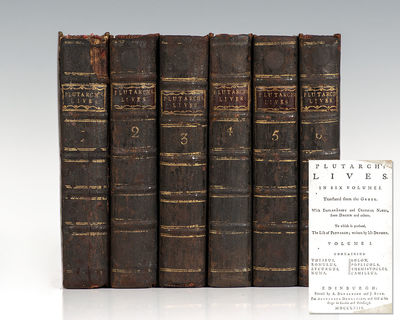 by Plutarch
Edinburgh: A. Donaldson and J. Reid, 1763. Rare 18th century printing of Plutarch's Lives. Octavos, bound in full contemporary red-speckled calf with red morocco spine labels lettered in gilt, gilt ruling in six compartments within raised bands. In very good condition with the bookplates of William Starkie to the pastedown of each volume. Plutarch's biographical works chronicled the lives of the most notable Greek and Roman political figures including Alexander the Great and Julius Caesar, among others. In 1770, English brothers John and William Langhorne published "Plutarch's Lives from the original Greek, with notes critical and historical, and a new life of Plutarch" in 6 volumes, dedicated to Lord Folkestone. One of the most prolific and versatile writers in literary history, John Dryden excelled as a poet, a playwright, a critic, and a translator. According to Dr. Johnson, "Dryden may be properly considered as the father of English criticism," and Pope saw in Dryden's work "better specimens of every mode of poetry than any other English writer" (Allibone, 524). (Inventory #: 104438)
$1,750.00 add to cart or Buy Direct from
Raptis Rare Books
Share this item