Voyage of his Majesty's Ship Alceste, to China, Corea, and the Island of Lewchew; with an Account of her Shipwreck. Extra-Illustrated 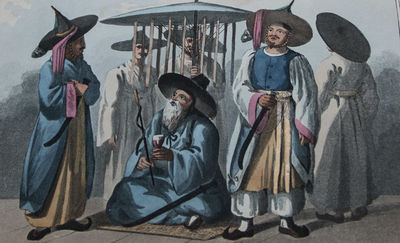 by M'Leod, John
London: John Murray, 1820. Third edition as stated. Hardcover. vg+. Large Octavo. (4) 339 (1)pp., 5 aquatints, 4 folding color lithographs, 3 folding maps. Modern brown half leather over brown cloth with gilt lettering and ruling on spine. Tan endpapers. Frontispiece of Capt. Sir Murray Maxwell, drawn and engraved by T. Wageman, an uncolored soft-ground etching. Five additional colored aquatints, signed Lieut. Dwarris, delin and I. Clark, Sculpt, except the last aquatint, signed I. M'Leod delin. (Abbey Travel 559). Abbey states 1819 for the third edition, 1820 for the fourth. The folding map charting the Trak & Discoveries of his Majesty's Ship Alceste & Lyra in the Eastern & Yellow Seas, with the adjacent parts from the best authorities, signed J. Walker sculpt. Extra illustrated edition containing two additional folding maps of the Island of Lew-Chew, the second with surroundings, both signed Ackerman Lith., and four additional folding color lithographs: the first depicting Chief Magistrate of Napha, signed in plate by Brown, and lith. P. S. Duval & Co., Phil., the second depicts A Street in Napha, signed from nature by Heine, lith. T. Sinclair, Philad., the third Lew Chew Costumes, Middle Class, signed Dag and drawn by E. Brown, Jr. Land c by Heine, Ackerman Lith, and the fourth entitled Lew Chew, signed From nature by Heine, figures by Brown, T. Sinclair lith. Philad. Contains appendices illuminating the illuminating the voyage and culture of the Lew Chew islands, including vocabulary. The two extra maps and the four folding lithographs are not called for on the printed page with directions for placing the plates. Historic voyage of discovery to China, Korea, and the island of Lewchew (Okinawa), by the Alceste under the command of Captain Murray Maxwell with John M'Leod appointed surgeon to the ship. The HMS Alceste was wrecked in the Gaspar Street with the crew becoming stranded on an island nearby. Despite several attacks by Malay pirates no lives were lost and the crew was rescued by a ship of the British East India Company. Light offsetting of frontispiece etching to title page. Thin brown frame on recto and verso of page with directions for plates, from unknown removed laid in paper. First map of the Island of Great Lew-Chew loose but present. Binding and interior in overall very good+ condition. (Inventory #: 46156)
$950.00 add to cart or Buy Direct from
Eric Chaim Kline Bookseller
Share this item