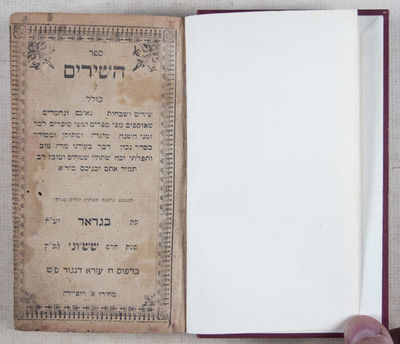 by Dangoor, Ezra (ed. and forward by)
Baghdad: Ezra Dangur/ Ezra Dangoor, 1906. First edition. Hardcover. g+ to vg-. Duodecimo. [2] 182 double-sided leaves. Rebound in modern red buckram boards, with gilt lettering on the spine. Title page with decorative woodcut border. The initial 6 leaves contain a foreword from the editor/publisher of the book Rabbi Ezra Dangoor, and an extensive table of contents. The work is a collection of 415 piyutim or Jewish liturgical poems (prayers) composed by Jehoseph Ezobi, Judah ha-Levi, Israel Najara, and a great number of other figures including various Baghdadi Rabbis. Each poem is numbered and titled. Text in Hebrew and Judeo-Arabic. Binding with some some light rubbing and minor bumping to extremities. Interior with some light water stains and small holes to the title page, with no loss of text. Pages browned with a few sporadic minor smudges or small stains throughout. The final leaf has been trimmed along the side margin,resulting in minor loss of text. The final leaf has been reinforced with japan tissue along the gutter. Binding in very good- interior in good+ condition overall. Extremely scarce. Ezra Reuben Dangoor (1848-1930) was a Baghdadi rabbi, scholar, printer and publisher. He was a leading and influential member of the Baghdadi Jewish community from the 19th - early 20th centuries, and served as Chief Rabbi of Baghdad from 1923-1926. In 1904 he opened the first publishing house in Baghdad, where he printed Jewish books in Hebrew and also printed textbooks in Arabic. Hebrew title: ספר השירים : כולל שירים ושבחות Hebrew Author: דנגור, עזרא Bibliographic Reference: Yaari. II, 148. (Inventory #: 46264)
$450.00 add to cart or Buy Direct from
Eric Chaim Kline Bookseller
Share this item