Incidents of Travel in Greece, Turkey, Russia, and Poland. 2 Vols 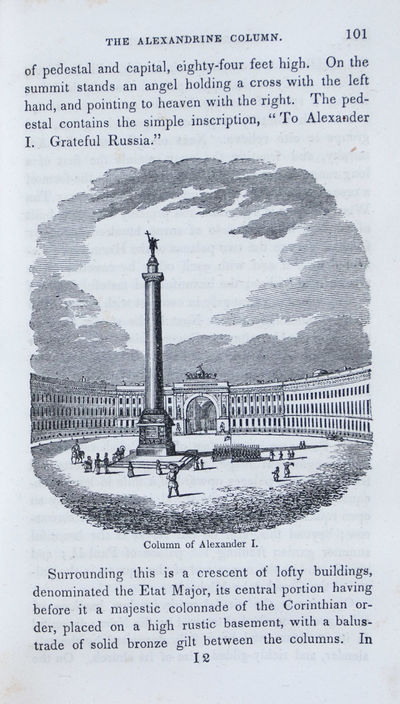 by Stephens, John L.
New York: Harper & Brothers, 1838. Ex-Library First edition. Hardcover. vg. Octavo. xi, 13-268, v, 7-275pp., 1 folding map. Original green patterned moire cloth with gilt lettering on spines. Frontispiece folding map indicating the author's route and small engravings throughout text. Stephens "...object has been to present a picture of the everyday scenes which occur to the traveller in the countries referred to, rather than any detailed description of the countries themselves." (Preface). Stephens was an American lawyer who became one of the foremost American explorers of his time and was a pivotal figure in the rediscovery of the Mayan civilization. "His wandering spirit mellowing his analytic eye, John L. Stephens is the best kind of guide. Whether describing the richness of a seraglio in Turkey of the drama of a gambling hall in Russia, the congenial and charismatic style of his narrative - with its hearty doses of humor - is warming, while the enthusiastic accounts of treks, discoveries, and friends made utterly engages. Add to this Stephens' conscientious inclusion of historical, sociopolitical, anthropological, and sometimes mythological, context, and Incidents of Travel in Greece, Turkey, Russia, and Poland becomes the next best thing to being there." (Early Editorial Review). A well preserved copy with only light wear along edges, light scuffing of lightly rubbed boards, spine somewhat sunned. Small stickers on inside covers. A few library stamps and previous owner's name inked to title pages. Map with small closed tear. Block with much less foxing than usually found. Overall in very good condition. (Inventory #: 46237)
$375.00 add to cart or Buy Direct from
Eric Chaim Kline Bookseller
Share this item