The Westover Manuscripts: Containing the History of the Dividing Line Betwixt Virginia and North Carolina; A Journey to the Land of Eden, A.D. 1733, and a Progress to the Mines. Written from 1728 to 1736, and Now First Published 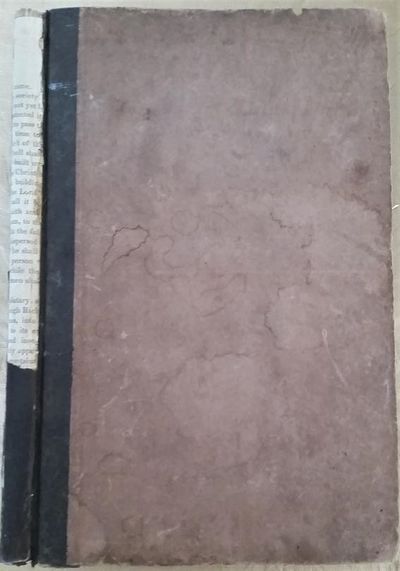 by Byrd, William
Petersburg, VA: Edmund and Julian C. Ruffin, 1841. 8vo. iv,143,[1] pp. Contemporary cloth backed plain boards, most of cloth spine gone. Sound. Lightly foxed throughout. Inscribed by the co-publisher, Edmund Ruffin, to W[illiam] H[enry] Ruffner dated 1849. First edition. Posthumously published writings of William Byrd II (1635-1744), prominent Virginia planter, author, and colonial official. In 1728, Byrd was one of the commissioners appointed to delineate the disputed border between Virginia and North Carolina. "His history gives an excellent description of the region along this disputed line. The book is one of genuine literary merit and displays a keen sense of humor. Byrd makes many references to the indolence of North Carolinians, their lack of religion, their poverty, laziness, and disrespect for law and order." Ruffin is perhaps best-known today for his 1860 work, Anticipations of the Future, "designed to show the necessity of secession and the glories of an independent South."--DAB. However, from about 1815 until the 1850s he was most active in developing agriculture and in preparing a landmark report on the agricultural history of Virginia. After the war Edmund Ruffin committed suicide rather than live under the rule of the Northern Republicans. Ruffner, 30 years younger than Ruffin, was chaplain at the University of Virginia in 1849-51. Sabin 9721. Howes B 1077. Clark, I: 50; also see 48 & 49. See Dictionary of American Biography for sketches of both Ruffin and Ruffner. (Inventory #: 387)
$450.00 add to cart Available from
De Simone Company
Share this item
De Simone Company, Booksellers
Offered by