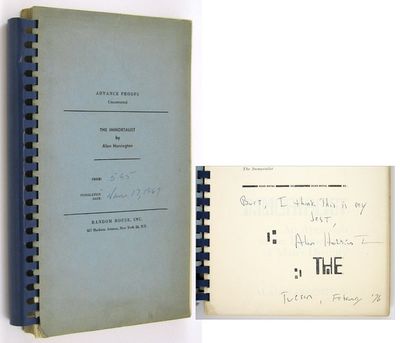 by HARRINGTON, Alan
NY: Random House. (1969). The uncorrected proof copy of this unusual volume of nonfiction -- an extended essay on "An Approach to the Engineering of Man's Divinity," written by a novelist (The Revelations of Doctor Modesto, among others) who was a friend of Jack Kerouac and Neal Cassady, as well as of Edward Abbey and William Eastlake. He was the model for Hal Hingham, who was visited by Kerouac's and Cassady's alter-egos in On the Road. As both a writer and a firm believer in the power of mind over body (he was also a friend of Timothy Leary), Harrington provides an unusual link between the writers of the Beat Generation, with their explorations of alternate states of consciousness, and the nature writers of the American Southwest that emerged in the 1960s. Inscribed by the author: "____, I think this is my/ best,/ Alan Harrington/ Tucson, February '76." Harrington has also re-written the second sentence of the book by hand. Bound galleys printed on rectos only. 7 1/2" x 11 3/4". Comb-bound. Front cover separating at lower rings; near fine. Unless otherwise noted, our first editions are first printings. First Edition. No Binding. Near Fine. (Inventory #: 017827)
$500.00 add to cart Available from
Ken Lopez - Bookseller
Share this item