Deadly Persuasion: Why Women and Girls Must Fight the Addictive Power of Advertising 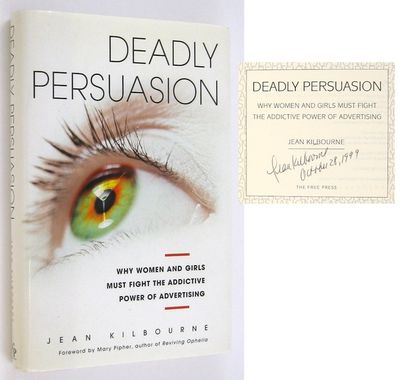 by KILBOURNE, Jean
(NY): Free Press. (1999). A book on media literacy, explaining the ways women are targeted as consumers, by one of the creators of the documentary film series Killing Us Softly. Signed by the author and dated prior to publication. Later released with the title Can't Buy My Love. Kilbourne was inducted into the National Women's Hall of Fame in 2015. Near fine in a near fine dust jacket, with a blurb by Maya Angelou. Unless otherwise noted, our first editions are first printings. First Edition. Hardcover. Near Fine. (Inventory #: 034616)
$250.00 add to cart Available from
Ken Lopez - Bookseller
Share this item

The House of the Seven Gables

Boston : Ticknor, Reed, and Fields , 1851
(click for more details about The House of the Seven Gables)

Edinburgh and London : William Blackwood , 1868
(click for more details about The Spanish Gypsy)
View all from this seller>