The Poverty of Historicism. 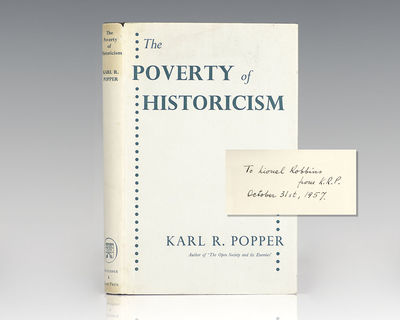 by Popper, Karl R
London: Routledge & Kegan Paul, 1957. First edition of this undisputed classic in the philosophy of social science. Octavo, original cloth. Association copy, inscribed by the author on the front free endpaper in the year of publication, "To Lionel Robbins from K.R.P. October 31st, 1957." The recipient, British economist Lionel Charles Robbins, was a prominent member of the economics department at the London School of Economics. He and Popper were colleagues for over twenty years and formed a strong inter-departmental alliance, fortified by their mutual friendship with Friedrich von Hayek. They also had significant intellectual intersections, with Robbins playing a role in the development of two of Popper's most important works, The Open Society and, the present volume: The Poverty of Historicism. In spring 1936, Popper received an invitation from Hayek to the LSE to deliver a paper at the seminar he ran jointly with Lionel Robbins. The subject of the paper was to be so-called historical 'laws' and the methodology of the social sciences, what would become The Poverty of Historicism. The seminar "was usually attended by some thirty or forty members of staff and postgraduate students as well as by visiting European and Americans. It is not clear how many showed up for the unknown Viennese philosopher. In addition to Hayek and Robbins, present were also economists G. L. S. Shackle and Abba Lerner, Ernst Gombrich, and possibly Karl Mannheim, a reader in sociology at the LSE" (Hacohen, 316). It would make its first appearance in print in 1944-1945, published across three issues of Economica, the in-house economics journal of the LSE. Near fine in a near fine dust jacket with light toning and a few small chips. An important association. An undisputed classic in the philosophy of social science, the substantial content of which marks a continuation of Popper's relentless pursuit of the principal of falsification, as outlined in the seminal Logic of Scientific Discovery, brought to bear on the methodology of historicist social science. It is a broad rebuttal of holism, that is, the view that social groups and societies are greater than the sum of their parts and can be treated as 'organic' entities in their own right, as well as the predominance of the dialectical conceptions of social change in the methodology of the social sciences.Upon publication in 1957, The Poverty of Historicism was hailed by Arthur Koestler as 'probably the only book published this year which will outlive the century.' Beautifully written, it has inspired generations of readers, intellectuals and policy makers. (Inventory #: 104071)
$9,800.00 add to cart or Buy Direct from
Raptis Rare Books
Share this item