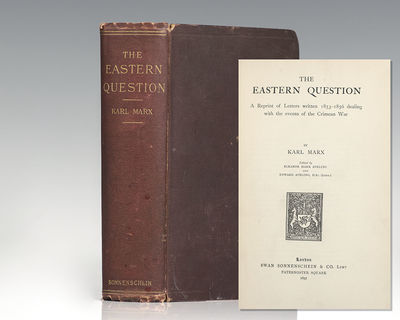 by Marx, Karl
London: Swan Sonnenschein & Co, 1897. First edition in English of this collection of letters and articles by Karl Marx dealing with the events of the Crimean War. Octavo, original cloth with gilt titles to the spine, folding map in color at rear. Edited by Eleanor Marx Aveling and Edward Aveling. In very good condition with light rubbing. A very sharp example. Marx's theories about society, economics and politics--collectively understood as Marxism--hold that human societies develop through class struggle. In capitalism, this manifests itself in the conflict between the ruling classes (known as the bourgeoisie) that control the means of production and working classes (known as the proletariat) that enable these means by selling their labor power in return for wages. Employing a critical approach known as historical materialism, Marx predicted that, like previous socioeconomic systems, capitalism produced internal tensions which would lead to its self-destruction and replacement by a new system: socialism. For Marx, class antagonisms under capitalism, owing in part to its instability and crisis-prone nature, would eventuate the working class' development of class consciousness, leading to their conquest of political power and eventually the establishment of a classless, communist society constituted by a free association of producers. Marx actively fought for its implementation, arguing that the working class should carry out organised revolutionary action to topple capitalism and bring about socio-economic emancipation. (Inventory #: 105014)
$750.00 add to cart or Buy Direct from
Raptis Rare Books
Share this item