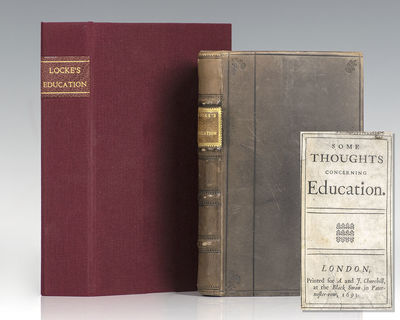 by Locke, John
London: Printed for A. and J. Churchill, 1693. First edition of Locke's seminal treatise on the education of gentlemen which, for over a century, was the most important philosophical work on education in England. Octavo, bound in full calf with morocco spine label lettered and decorated in gilt, raised bands and ruling to the spine. ruling and floral cornerpieces to the front and rear panels stamped in blind, all edges speckled red. In very good condition. Housed in a custom cloth clamshell box. A scarce and important work. While in political exile during the 1680s, Locke wrote letters to his friend Clarke of Chipley about the education of his children. These letters form the substance of his influential Thoughts on Education, considered a classic in the subject. "Clarke had spoken of the letters to Thomas Molyneux, then studying medicine at Leyden. A correspondence began between Locke and Molyneux's brother WIlliam, who insisted that the letters be published"(DNB XII, 33). It was translated into almost all of the major written European languages during the eighteenth century, and nearly every European writer on education after Locke, including Jean-Jacques Rousseau, acknowledged its influence. (Inventory #: 106030)
$7,500.00 add to cart or Buy Direct from
Raptis Rare Books
Share this item