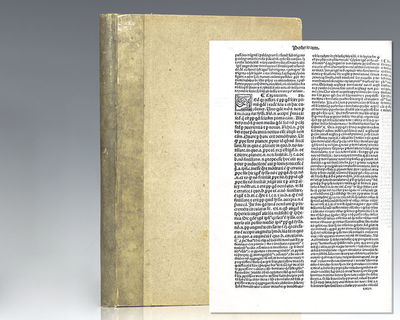 by Aristotle; Antonio Andreas. Edited by Walter Burley and Robert Grosseteste
Venice: Gregorium de Gregorijs, 1514. Rare 16th century printing of Aristotle's Posterior Analytics; bound together with Spanish Franciscan theologian Antonius Andreas's best known work, Quaestiones super XII libros Metaphysicae Aristotelis. Quarto, bound in contemporary parchment over handmade paper-covered boards, woodcut initials, text in two columns. In very good condition. A rare and desirable collection. The Posterior Analytics is a text from Aristotle's Organon that examines demonstration, definition, and scientific knowledge. In the work, Aristotle distinguishes 'demonstration' as a syllogism productive of scientific knowledge, and 'definition' as the statement of a thing's nature: the meaning of its name, or of an equivalent nominal formula. In the Prior Analytics, syllogistic logic is considered in its formal aspect; in the Posterior it is considered in respect of its matter. The "form" of a syllogism lies in the necessary connection between the premises and the conclusion. Aristotle concludes the book with the way the human mind comes to know the basic truths or first principles, which are not innate, because people may be ignorant of them for much of their lives. Of all types of thinking, scientific knowing and intuition are considered as only universally true, where the latter is the originative source of scientific knowledge. (Inventory #: 104082)
$6,000.00 add to cart or Buy Direct from
Raptis Rare Books
Share this item