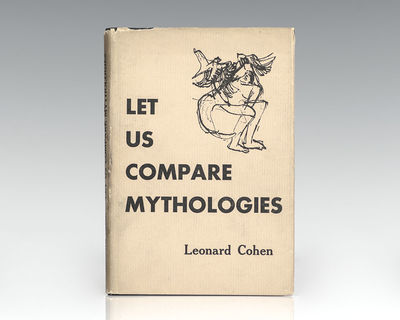 by Cohen, Leonard
Montreal: McGill Poetry Series by Contact Press, 1956. First edition of Cohen's first book, which explores philosophy, sexuality, death, a world of violent contrasts that would define his future literary and musical careers. Octavo, original cloth. With five full-page line illustrations by Freda Guttman. Near fine in a near fine dust jacket. An excellent example of this rare first book, which reportedly, fewer than 400 copies of the first edition were printed (Nadel, 45). When Leonard Cohen published his first book, Let Us Compare Mythologies, he had already received prestigious awards for his poetry, which, from the first, revealed his abiding interest "in mythology and magic... The first poem in Let Us Compare Mythologies, 'Elegy,'exhibits a number of characteristics which recur throughout his work: his almost magical control and modulation of verbal melody, his sensuous particularity, the empathetic reach of his imagination and his fascination with situations which mingle violence and tenderness to heighten the effect of both. We also see emerge for the first time the theme of the quest--here as usually in Cohen the quest for a lost or unknown God, mysterious, elusive, but compelling" (Pacey, Phenomenon of Leonard Cohen, 5-6). (Inventory #: 107435)
$10,000.00 add to cart or Buy Direct from
Raptis Rare Books
Share this item