The Women at Point Sur (INSCRIBED, with original photographs) 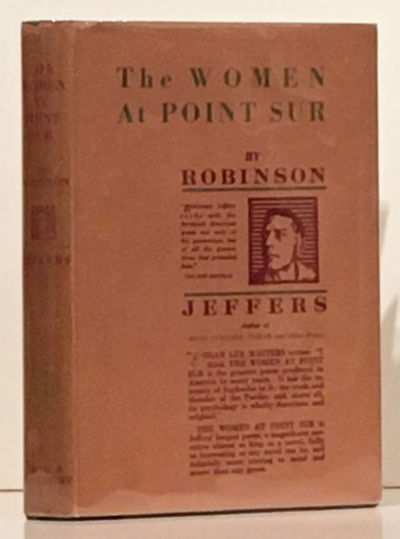 by Jeffers, Robinson
New York: Boni & Liveright, 1927. First Edition. Includes a personal inscription from Robinson Jeffers to Lester Donahue; a handwritten postcard to Mr. Donahue from Una & Robin; two original black & white photographs of Jeffers dated 1934, one showing Robinson & his two sons riding horses; an undated & early photograph of Tor House in Carmel; and a photograph of Robinson, Una, Donnan (son) & wife, Lee, and Dame Judith Anderson, long time friend of Robinson and Una. Laid in is a single-page ALS from Donnan Jeffers to Mr. Donahue thanking him for his kind letter following Robinson's death in 1962. Lester Donahue (1892-1964) was a Los Angeles-born concert pianist and a protégé of the actress Madame Helena Modjeska. Also included is an original black & white photograph of Robinson Jeffers at Tor House, SIGNED and dated 1950, by noted photographer, Ira H. Latour (1919 - 2015), who studied with Ansel Adams, Edward Weston and Minor White. 8vo. 175 pp. A near fine copy in publisher's dustjacket. "The Women at Point Sur is Jeffers' longest poem, a magnificent narrative almost as long as a novel, fully as interesting as any novel can be, and infinitely more stirring to mind and senses than any prose. (Inventory #: 19226)
$1,680.00 add to cart or Buy Direct from
Carpe Diem Fine Books
Share this item

Your satisfaction is guaranteed.All items are offered subject to prior sale and shipped subject to approval, but notification of return must be made within ten days and returns made promptly. New customers are asked to prepay, or supply ABAA references. Postage and insurance charges are billed to domestic orders; international orders are shipped by air mail, with full charges billed. Payment may be made by check or bank draft; we also accept all credit cards and PayPal. Institutions can be invoiced according to their requirements.9.25% sales tax will be charged California residents.
More from this seller

Farthest North. Being the record of a voyage of exploration of the ship "Fram" 1893-96 and of a fifteen months' sleigh journey by Dr. Nansen and Lieut. Johansen (2 volumes)

London : George Newnes, Ltd , 1898
(click for more details about Farthest North. Being the record of a voyage of exploration of the ship "Fram" 1893-96 and of a fifteen months' sleigh journey by Dr. Nansen and Lieut. Johansen (2 volumes))

Map of China Prepared for the China Inland Mission