A Voyage of Discovery to the North Pacific Ocean, and Round the World; In which the Coast of North-West America has been Carefully Examined and Accurately Surveyed, Undertaken by His Majesty's Command, Principally with a View to Ascertain the Existence of any Navigable Communication between the North Pacific and North Atlantic Oceans; and Performed in the Years 1790, 1791, 1792, 1793, 1794 and 1795, in the Discovery Sloop of War and Armed Tender Chatham, under the Command of Captain George Vancouver. A New Edition, with Corrections 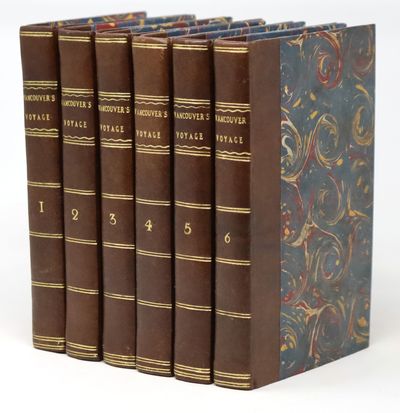 by Vancouver, George
London: John Stockdale, 1801. Hardcover. Near fine. First octavo edition and second edition overall. Six volumes uniformly bound in recent quarter leather and marbled boards, complete with two large folding maps/charts and 17 folding plates; 2 pages of ads at the end of Volume VI. Occasional light foxing, a couple small splits/tears to maps, else fine. Signature of Alfred Fowler on the front free endpaper of Volume I and the rear pastedown of Volume II. Vancouver sailed by way of the Cape of Good Hope to Australia, then to New Zealand, Hawaii, and the northwest coast of America -- discovering previously unknown geographical features in each locale. In three seasons' work, Vancouver surveyed the coast of California with remarkable accuracy, visited a number of the Spanish settlements in Alta California, investigated the Strait of Juan de Fuca, circumnavigated Vancouver island, and disproved the existence of any passage between the Pacific and Hudson Bay. In all, Vancouver's party sailed about 55,000 miles, in what Hill (1753) calls "one of the most important [voyages] ever made in the interests of geographic knowledge." Howgego I V13; Howes V-23; Sabin 98443. (Inventory #: 20702)
$5,500.00 add to cart or Buy Direct from Walkabout Books
Share this item

Cuba and Its Attractions [Cover Title]; The Guide Published for the Convenience of Tourists

Habana : Imprenta Avisador Comercial , 1912
(click for more details about Cuba and Its Attractions [Cover Title]; The Guide Published for the Convenience of Tourists)

Hemet Land Company , 1902
(click for more details about Hemet Southern California, Its Homes and Scenes)
View all from this seller>