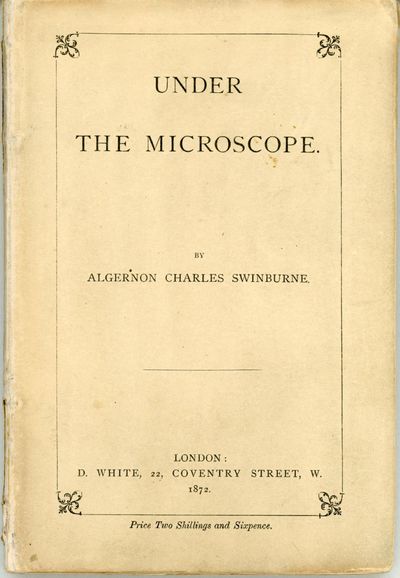 by Swinburne, Algernon Charles
London: D. White, 1872. Octavo, pp. [1-4] [1] 2-88, half title leaf and errata slip present, D5 a cancel as usual, original white wrappers printed in black. First edition. Swinburne's satirical reply to Robert Buchanan's THE FLESHY SCHOOL OF POETRY, which had strongly admonished Swinburne, Rossetti and their circle for what Buchanan saw as a depraved decadence in their writings -- a "morbid deviation from the healthy forms of life." Rossetti had replied to Buchanan with "The Stealthy School of Criticism" in THE ATHENAEUM, December 1871, but it was Swinburne's UNDER THE MICROSCOPE that was widely read, and it became something of a manifesto for the Pre-Raphaelite movement. Wrappers lightly dust-soiled, some loss to lower edge of spine panel, a very good copy. In cloth chemise and black levant morocco pull-off slipcase. (#164562) (Inventory #: 164562)
$550.00 add to cart or Buy Direct from L.W. Currey
Share this item
L.W. Currey Inc.
Offered by