One year in the life of a young woman, educated, socially active, and employed in the years following suffrage 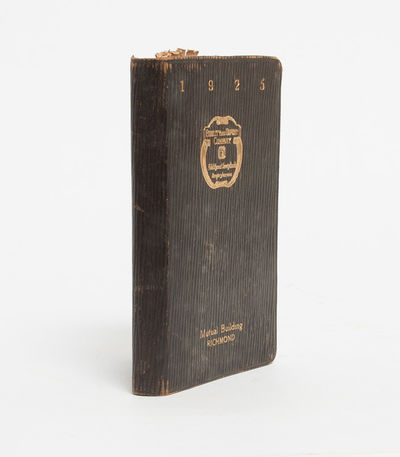 by [Diary] Beatrice E. Smither
[Richmond, VA], 1925. One year diary bound by Fidelity and Deposit Company of Richmond. Comprised of 271 pages handwritten by Beatrice E. Smither, a young woman working in a law firm five years after the 19th Amendment's passage. The majority of passages are written in longhand, with scattered shorthand throughout. Beatrice's daily diary reveals an incredibly active life, and gives a strong sense of the kind of independence that women of her generation were experiencing.

Employed in Richmond, Virginia at the law firm of Williams and Mullen (founded 1909 and still operating), Beatrice Smithers is the embodiment of a flapper. Throughout the year of 1925, she reports daily on her work at the law firm (where she frequently stays til 6:00 or later), on meetings of her multiple church and civic clubs, and on her romances with two men, Cy and George, who rival for her affection. She even reports on political events such as board, local, and presidential elections in which she participates. The diary is clearly a safe space for her, where she can sort out ideas and emotions.

"Quite busy at work today," she reports on January 5, "Lunch at noon with Mae Burton - at night trying to work up some plan for Junior Council Meeting - Cy talks to me early - does not bring me home from work - John D. calls me up and wants me to attend a meeting of the Sunday Night Club." In entries like these, we get a sense of the busy rhythm of Beatrice's days. In others, we get a sense of her ability to manage and lead groups, and how seriously she takes community engagement. "Leave office at 5:25 to ride up...to Public Library & look over same & I take out our membership card to get a book for my Sunday leading exercise -- Mae brings me home & I work for awhile on preparing to lead Sunday morning exercises," she reports on January 22. We also get regular glimpses into Beatrice's private life and her family. "Dear Diary," she writes on February 18, "As if we are not all worried enough to kill us with father's craziness, drunk nearly all the day since he got back from Westbrook, I had to turn my ankle while walking." The next day, "Father home - who is again, as usual, drunk with liquor and not himself." The addiction issues in her family drive Beatrice to pursue financial independence -- and to think seriously about her choice of a mate, as she debates between Cy "so dear and devilish" and George "so sweet and faithful"; she even despairs "I wonder if I am a traitor to my own self, loving two men at the same time" and "I wish I could die!...Everything is a mess." There are even entries that cryptically suggest she had a pregnancy scare or was using the rhythm method to avoid it: "Menstruation begins" (October 8) and "Menstruation ends" (Oct 14), the only two such in the whole book. In the course of the year, she ultimately breaks with Cy, gets engaged to stable and supportive George, and decides to continue working.

A densely packed manuscript with research potential including but not limited to women's employment history, gender studies post-suffrage, literature, the history of reading, the history of social and civic clubs in America, the history of tourism, paleography, family addiction and mental illness, and sexuality. (Inventory #: 3070)
$1,350.00 add to cart or Buy Direct from
Whitmore Rare Books
Share this item

New York : Macmillan , 1907
(click for more details about The Convert)
View all from this seller>