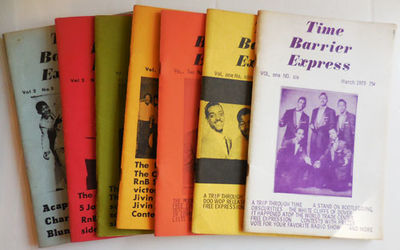 by Doo-Wop, Rock & Roll and R & B Periodical - Schwartz, Bill, Editor
White Plains: Time Barrier Express Enterprises, 1976. First edition. Paperback. Very Good. Small format stapled magazines. Seven early issues of Bill Schwartz's periodical promoting and disecting the worlds of doo-wop, early rock and roll and r & b music and musicians. Sold here as a group. Includes Vol. One No. Six, 9, Vol. Two No. 1, 2, 3, 4, and 5. Some of the bands featured in these issues included The Moonbeems, The Friegos, The Chessmen, 5 Jades and Acappella Disco among others. All issues a bit soiled, but still in very good collectible condition. The magazine ran for 27 issues in total. Later issues would change format and become larger and glossier. These early issues have all become quite uncommon. (Inventory #: 28436)
$175.00 add to cart or Buy Direct from Derringer Books
Share this item
Derringer Books
Offered by

San Francisco : Intersection , 1980
(click for more details about Shall We Gather By The Riiver" A Memorial Poetry Reading for Pulitzer Prize Poet James Wright 1927 - 80 (Poster))
View all from this seller>