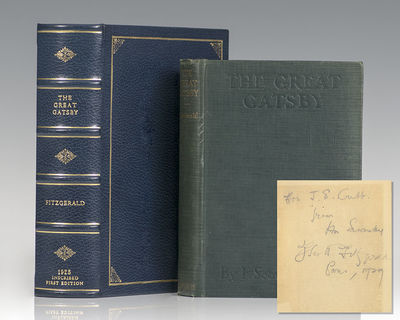 by Fitzgerald, F. Scott
New York: Charles Scribner's Sons, 1925. First edition, first issue of the author's masterpiece with "chatter" p.60, "northern" p.119, "sick in tired" p.205, and "Union Street station" p.211. Octavo, original green cloth, gilt titles to the spine. With a presentation note inscribed by the author bound in before the half-title page, "For J.E. Cribb from yours sincerely F Scott Fitzgerald Paris, 1929." Paris in the 1920s proved the most influential decade of Fitzgerald's development. Fitzgerald made several excursions to Europe, mostly Paris and the French Riviera, and became friends with many members of the American expatriate community in Paris, notably Ernest Hemingway. Fitzgerald's friendship with Hemingway was quite effusive, as many of Fitzgerald's relationships would prove to be. Hemingway did not get on well with Zelda, however, and in addition to describing her as "insane" in his memoir A Moveable Feast, Hemingway claimed that Zelda "encouraged her husband to drink so as to distract Fitzgerald from his work on his novel", so he could work on the short stories he sold to magazines to help support their lifestyle. In near fine condition with a touch of wear. Housed in a custom full morocco clamshell box. In 1922, Fitzgerald announced his decision to write "something new--something extraordinary and beautiful and simple and intricately patterned." That extraordinary, beautiful, intricately patterned, and above all, simple novel became The Great Gatsby, arguably Fitzgerald's finest work and certainly the book for which he is best known. A portrait of the Jazz Age in all of its decadence and excess, Gatsby captured the spirit of the author's generation and earned itself a permanent place in American mythology. Cyril Connolly called The Great Gatsby one of the half dozen best American novels: "Gatsby remains a prose poem of delight and sadness which has by now introduced two generations to the romance of America, as Huckleberry Finn and Leaves of Grass introduced those before it" (Modern Movement 48). Consistently gaining popularity after World War II, the novel became an important part of American high school curricula. Today it is widely considered to be a literary classic and a contender for the title "Great American Novel". In 1998, the Modern Library editorial board voted it the 20th century's best American novel and second best English-language novel of the same time period. It was the basis for numerous stage and film adaptations. Gatsby had four film adaptations, with two exceptionally big-budget versions: the 1974 version starring Robert Redford and Mia Farrow, as well as Baz Luhrmann's 2013 version starring Leonardo DiCaprio, Tobey Maguire and Carrie Mulligan. Fitzgerald's granddaughter praised Lurhmann's adaptation, stating "Scott would be proud. (Inventory #: 104061)
$38,000.00 add to cart or Buy Direct from
Raptis Rare Books
Share this item