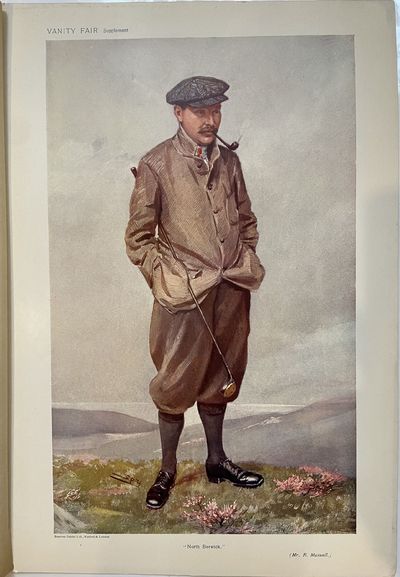 by VANITY FAIR
London: Vanity Fair, 1906. Leslie Ward (Spy). Color lithograph. Sheet measures 15 3/4 x 10 1/2 inches. This supplement to Vanity Fair titled "North Berwick", features a golfer. Mr Robert Maxwell in full 3/4 pose with a golf club under his arm.The original artist was Sir Leslie Ward, otherwise known as "Spy," who was a British cartoonist celebrated for his satiric portraits. The print is in good condition and includes the text supplement.The British Vanity Fair (1868--1914), a compendium and often critique of Victorian culture, is best known today for its lithographed caricatures of contemporary figures and issues. Its portrait series pictured and described--with both praise and caricature--prominent Victorian and Edwardian politicians, lawyers, doctors, and similar professionals. Their images, often accompanied literary and political articles, cultural reviews, serialized fiction, and other standard weekly magazine features. As the publication grew, it turned increasingly toward gossip as a topic. (Inventory #: 293198)
$200.00 add to cart or Buy Direct from
Argosy Book Store
Share this item

London : E. Stanford , 1857
(click for more details about India)
View all from this seller>