Monody on Major AndrÃ¨. . . . To Which are Added Letters Addressed to Her by Major AndrÃ¨, in the Year 1769 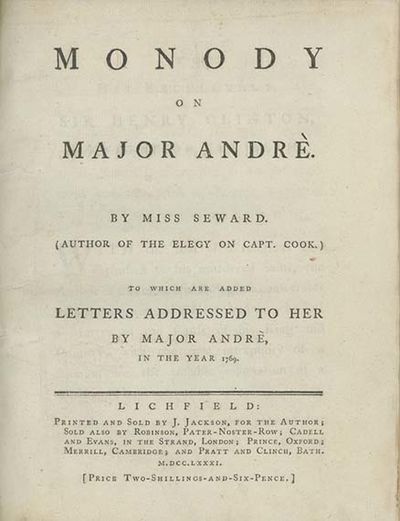 by SEWARD, ANNA
Lichfield: Printed and Sold by J. Jackson, for the Author; Sold also by Robinson, Cadell and Evans, [et al.], 1781, 1781. First edition. Sabin 79477; Adams, American Controversy, 81-65a; Jackson, Romantic Poetry by Women, page 291; NCBEL II, 682. Fine copy.. 4to, recent dark red quarter morocco and marbled paper boards period style by Philip Dusel, gilt lettering. The second published work by poet and writer Anna Seward (1742-1809), a.k.a. the Swan of Lichfield, following closely her monody on Captain Cook. In her 28-page elegy on Major John AndrÃ¨ (1750-1780), she laments his hanging as a spy by the contemptible Americans and in particular George Washington: "Remorseless Washington! the day shall come / Of deep repentance for this barb'rous doom! / When injur'd AndrÃ¨'s memory shall inspire / A kindling Army with restless fire." Seward was personally acquainted with John AndrÃ¨, who was considered a potential suitor to her beloved adopted sister, Honora Sneyd, and the poem contains numerous autobiographical facts about him, his superior temperament, and virtuous qualities. The poem is signed in Seward's hand at the conclusion, as is the case with almost all copies. (Inventory #: 28144)
$975.00 add to cart or Buy Direct from
Brick Row Book Shop
Share this item

by AUSTIN, PAMELIA A.

An Essay on Abstinence from Animal Food, as a Moral Duty

London: Printed for Richard Phillips, 1802 , 1802
(click for more details about An Essay on Abstinence from Animal Food, as a Moral Duty)
View all from this seller>