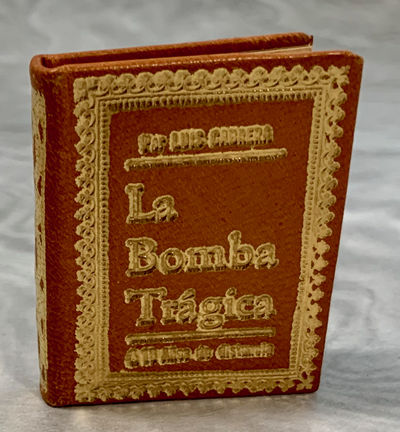 by Luis Vicente Cabrera Lobato (1876-1954)
Mexico City: Libreria Anticuaria "Mexico en Libros" G. M. Echaniz, 1964. Hardcover. Very Good. FIRST EDITION, thus, text in Spanish. Miniature Book. 2 7/8 x 1 1/2 inches. [viii], vi, [iv], 40, [4] pp. Frontispiece portrait of Cabrera, introductory letter to Jose Domingo Lavin; text clean, unmarked. Gilt- and blind-stamped tan leather, decorative endpapers; binding square and tight. Glen Dawson's copy without distinguishing marks. RGKK819-044. Very Good. This volume contains a letter written in August 1950 by Luis Cabrera to Jose Domingo Lavin as an introduction to a magazine article published by Cabrera in August 12, 1945, in which Cabrera was the first to denounce the use of the atomic bomb on human beings. Luis Cabrera was a Mexican Lawyer, politician, and author. After a career at the highest levels of the Mexican government, Cabrera opened his own lawyer's office in 1950 and became adviser of President Adolfo Ruiz Cortines. See: Wikipedia. Concerning Dawson's Book Shop and Mexican miniature books, Glen Dawson has said "G. M. Echaniz, a dealer in books and artifacts, could not find enough Mexican miniatures for us, so he selected some eight titles, some in Spanish and some in English, which he had printed and bound, mostly with Dawson's Book Shop in the colophon." Bradbury. The colophon in this book references only Mexican printers and binders. REFERENCE: Bradbury, 20th-Century U.S. Miniature Books, No. 565. (Inventory #: RGKK819-044)
$50.00 add to cart Available from
John Howell for Books
Share this item

Milwaukee, WI : The ABCdarium , 1991
(click for more details about Reflections on Mortality in Prose and Poetry)

Milwaukee, WI : ABCDarium of Clifford L. Helbert , 1987
(click for more details about Ecce Littera, Vol. 1)
View all from this seller>