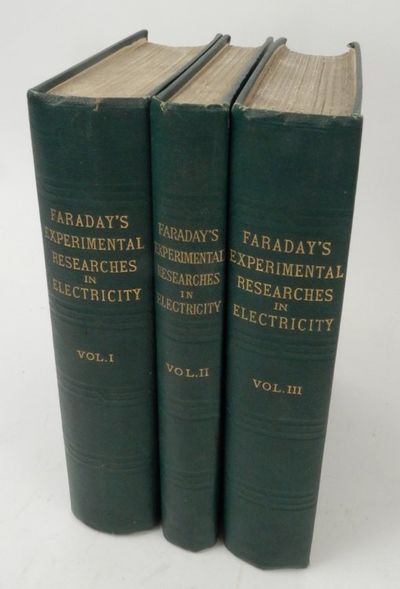 by Faraday, Michael
London: Bernard Quaritch (Vols I and II) / Richard Taylor and William Francis (Vol III), 1882. Later printing. Cloth. Near Fine. Later printing. Three Volumes. Vol I: vii, 574 pgs + 8 folding plates. Vol II: [5], viii, [v-vi], 302 pages + 5 plates (two folding). Vol III: [5], v-viii, 588 pages plus 4 plates (two folding). 8vo (binding measures 6 1/8 x 8 7/8 inches. Text block is 5 1/2 x 8 5/8 inches). Uniform light green pebbled cloth with simple blind-stamped decoration separating five compartments on spine and two nested blindstamped borders (one larger than the other) on front and rear panels. Each volume with "FARADAY'S | EXPERIMENTAL | RESEARCHES | IN | ELECTRICITY" in gilt in second compartment plus "VOL. I", "VOL. II", "VOL III" respectively in gilt in third compartment. Top edges dusted, minor wear to extremities. An unusually clean, attractive set. Cloth. "The collection emcompasses the entire range of Faraday's remarkable achievement, including his discovery of electromagnetic induction, his demonstration of the identity of all forms of electricity, his first general theory of electricity as a function if interparticulate strain, and the last series of researches on magnetism, containing the germ of modern field theory, in which Faraday rejected his earlier model of the transmission of magnetic theory in favor of one locating the manifestation of magnetic energy in the field surrounding the magnet." (Norman 762)

"Faraday was both one of the greatest physicists of the nineteenth century and one of the finest experimenters of all time. His principal contributions were made in advancing our knowledge of the nature and potentialities of electricity." (PMM)

The 1st collected volumes have long been desirable. Vols I and II went out of print before Vol III. Bookseller Bernard Quaritch bought the copyright and all reprint rights from Mrs. Faraday circa 1878. As Quaritch noted in a public letter: "Availing myself of the opportunity of buying from Mrs Faraday the copyright and existing stock, I completed, by facsimile reprint, a small number of copies as is plainly stated on the title-pages of vols I and 2." Quaritch used original printer Francis and Edwards for the facsimile reprints, the goal to make them as close as possible to the originals without creating an impression that new material was being published. A side effect of acquiring the extra sheets for Vol III was that some mixed sets were produced. AS OFFERED HERE, a few sets were bound uniformly in the Quaritch facsimile reprint binding, with Vols I and II having the Quaritch imprint, and with Volume III using the first edition sheets. Eventually Quaritch ran out of the original backstock, issuing Vol III with the Quaritch imprint as well.

We offer a prime example - uniform facsimile bindings in excellent condition with Vol III textblock from the first edition sheets.