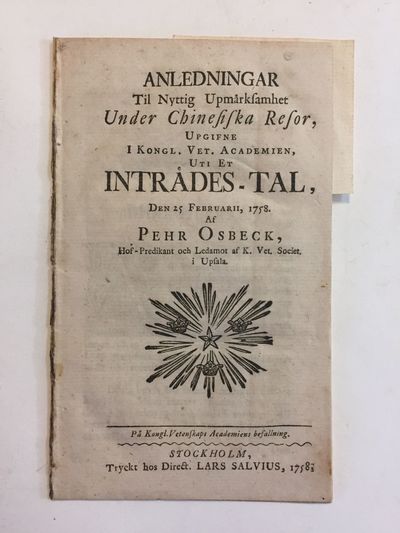 by Osbeck, Pehr (1723-1805)
Stockholm: Lars Salvius, 1758. Good. 8vo. 187 x 115mm. A8 B2 = 20 pp. Disbound, likely extracted from a larger volume. Curiously, the binder missed trimming an outer portion of A2 which was folded, and so retains its original size. Collecting natural history specimens in China at the urging of Carl Linnaeus. This interesting pamphlet marks Osbeck's election to the Royal Swedish Academy of Science, and which contents comprise Osbeck's 1758 inaugural speech at the Swedish Academy. His remarks (translated as "Reasons for useful attention during journeys to China") refer to his time in China and the Far East from 1750 to 1752. A former student of Linnaeus, Osbeck here urges visitors to China to observe and record the conduct of the people, as well as its manufacturing techniques and industries, and to collect useful specimens of local plants and animals.

At a time of growing European ambivalence towards China, the Swedish Academy still regarded it highly, particularly the Middle Kingdom, and continuously hosted lectures and presentations on various Chinese topics. Swedish naturalist Carl Linnaeus (1707-1778), who helped found the Swedish Academy and is well-known for formalizing binomial nomenclature, sent out many of his students to remote corners of the globe to map the global natural world according to his new taxonomic system and to collect as many plant and animal specimens as possible. Osbeck, one of Linnaeus's most prized pupils, was sent to China as chaplain of the Swedish East India Company (Svenska Ostindiska Companiet or SOIC) ship Prins Carl in 1750. He brought back a large collection of Chinese plants for Linnaeus to categorize, and he himself was a large collector of Chinese natural history. Osbeck's journal, entitled "Dagbok ofwer en ostindisk resa" ("Journal of an East-Indian journey") and first published in 1757, was widely used by Linnaeus in his revised tenth edition of "Systema naturae," along with other first-hand European accounts of East Asian travels.