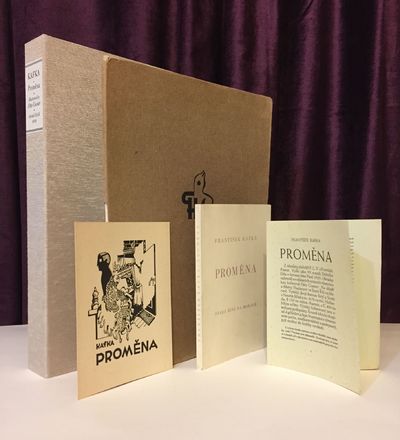 by Kafka, Franz; Coester, Otto (illustrator); Vrána, Ludvik; Pastor, František; Janouch, Gustav (translators)
Stara Rise (Czech Republic): Josef Florian, 1929. First Edition. Softcover. Very Good/Very good. Together 2 volumes, large 4to and 8vo. PORTFOLIO (310 x 235 mm). Half-title SIGNED by the artist, title-page, 2-page translation of Kafka's "Ein Traum" into Czech by Gustav Janouch, list of plates, and statement of limitation printed in red and black. With 6 full-page heliogravures from etchings by Otto Coester numbered 1-6 in pencil. Loose as issued original brown textured wrappers, front wrapper with vignette printed in black (spine chipped with long tear along fold), plates perfectly clean. TEXT VOLUME (170 x 115 mm). 82, [3] pp. Pictorial title-page printed in red and black. With 7 b/w illustrations in the text, likewise by Coester, 3 elaborate decorative initials printed in red. Original pale ivory wrappers, front wrapper and spine lettered in purple and grey (lightly rubbed). ADDED: 4-page publisher's prospectus and with illustrated card of Coester's "Promena" laid in. The entire ensemble preserved in a light gold colored cloth case. ¶ Important collection of the first illustrations of any Kafka work in any language. Here offered is the scarce first edition in Czech of "Metamorphosis," along with the rare, separately published portfolio of six heliogravures from etchings, all illustrated by Swabian artist Otto Coester. Coester lived in Moravia in the 1920s and belonged to a close-knit circle of Kafka admirers. Although there is no confirmed record of Kafka and Coester ever meeting in person, they certainly knew each other by reputation, and their proximity has led some scholars to question whether or not Coester had some inside knowledge of Kafka's vision (see: David Gallagher, "The Metamorphosis," p. 134). ¶ That Kafka's legendary "Der Verwandlung" is illustrated here for the first time is highly significant. From its "inception," Kafka had insisted that the creature exist only as the product reader's own worst nightmare, undefined by any graphic representation on the printed page. Indeed, concerning publication of the 1915 Leipzig first edition of "Der Vanderlung," Kafka demanded that: "The insect itself must not be illustrated by a drawing. It cannot be shown at all, not even from a distance." ¶ Thus these 1929 illustrations are the earliest published depiction of the mythic creature. The arresting, eerie heliogravures depict various highlights of the story, from the protagonist Gregor Samsa awakening "from monstrous dreams" to his transformation "right there on his bed into some sort of monstrous insect"; Gregor's wife Grete playing her violin for the boarders; the discovery of Gregor's disgusting carcass, and more. The text volume, published contemporaneously with the portfolio, contains an entirely DIFFERENT series of Coester's "Metamorphosis" illustrations; therefore, in order to assess the full compliment of the iconographic tradition of Franz Kafka's writings, we must examine both Coester editions together. Doing so is extremely difficult: OCLC identifies Univ. Illinois and Univ. Indiana as the only American institutions holding both the portfolio and the published first Czech edition; Harvard has only the book. ¶ Coester (1902-1990) was close to the Paris Surrealists, the Bauhaus, and the Werkbund; among his circle of friends were Alfred Kubin, Ossip Zadkine, Gerhard Marcks, and Ewald Matare. He traveled to Moravia in 1927, and there publisher and early Kafka admirer Josef Florian inspired Coester to create book illustrations for "The Metamorphosis." These appeared in 1929 in a portfolio limited to just 120 copies, of which ours is number 72, for which the illustrations were printed by the Graphic Union in Prague under the supervision of Josef Capek, and the letterpress by Kryl and Scotti in Novy Jicine. That Coester himself assumed responsibility for the distribution of the portfolio, and sold a number of copies in Germany, may account for its rarity: after all, Coester was a painter, not a bookseller, and both publications appeared during two World Wars, during which time the market for artist's books was almost non-existent (SOURCE: O.F. Babler, "Rane ceske preklady Franze Kafky" in: Franz Kafka: Liblicka Konference, ed. Eduard Goldstucker/ Prague: CSAV, 1963, p. 146). The first Czech edition of "The Metamorphosis," present here in excellent condition, was limited to 400 copies, of which ours is number 310 of 400 copies on velin, from a total edition of 600. ¶ See the exhibition catalogue: "Otto Coester - první ilustrátor Franze Kafky" (Dusseldorf Kunstverein fur die Rheinlande und Westfalen, 1990). Borchers / Svestka, Otto Coester, Monographie mit Oeuvreverzeichnis (1991), p. 22 and no. 13 a-h. Literature: Katerina Nakladalova, "Promena Franze Kafky od ilustrace po inspiraci Reflexe Kafkova dila ve vytvarnem umeni v Ceskoslovensku ["Transformation of Franz Kafka from illustration to inspiration: Reflection of Kafka's work in fine art in Czechoslovakia"], Masters Thesis, Masarykova University, Brno, 2013, figs. 4-6. (Inventory #: 2905)
$12,500.00 add to cart or Buy Direct from
Michael Laird Rare Books
Share this item

Providence, RI : The Providence Journal Print , 1892
(click for more details about Death in The Mail. A Narrative of The Murder of a Wealthy Widow and The Trial and Conviction of The Assassin, Who was Her Physician, Attorney and Friendly Adviser)
View all from this seller>