A Sermon Preached August 3, 1832, A Day Set Apart In The City of New York For Public Fasting, Humiliation, And Prayer On Account of The Malignant Cholera 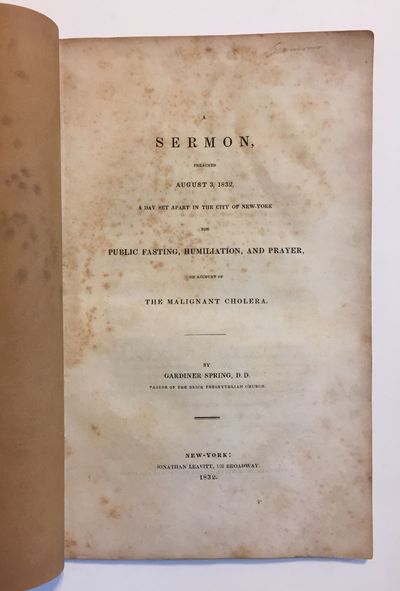 by [Cholera Epidemic, New York - 1832]. Spring, Gardiner
New York: Jonathan Leavitt, printed by G. P. Scott and Co, 1832. Good. 8vo in 4's. [4], 9-40 pp. Bound in sympathetic wrappers, evidence of stab-stitching. Foxing and browning throughout as is true in all copies. An interesting sermon preached in the midst of the 1832 cholera epidemic in New York, complete with the characteristic "fire and brimestone" judgments on the sins of the people.

Cholera reached the Western Hemisphere during the second pandemic (1829-1851). Many contemporary journalistic sources associated the disease with "large numbers of Irish and other emigrants," a "class of persons particularly exposed and carrying the disease wherever they go." This particular sermon, preached upon Isaiah 26:9 ("When thy judgments are in the earth, the inhabitants of the world will learn righteousness"), lays the blame not on recent emigrants but rather on a wicked and atheistic generation who no longer fear God, and has forgotten Him. "Most were thought to have willfully weakened their bodies through unwholesome ways of life and were now being punished for their sins. According to religious leaders, the three prominent abominations of the time were sabbath-breaking, intemperance, and debauchery, and cholera was viewed, as here, as a disease of "'mental and corporeal debility.'"