SAMMELBAND 49 SENATE REPORTS FROM 1807-08, WITH 4 ON BURR-WILKINSON CONSPIRACY 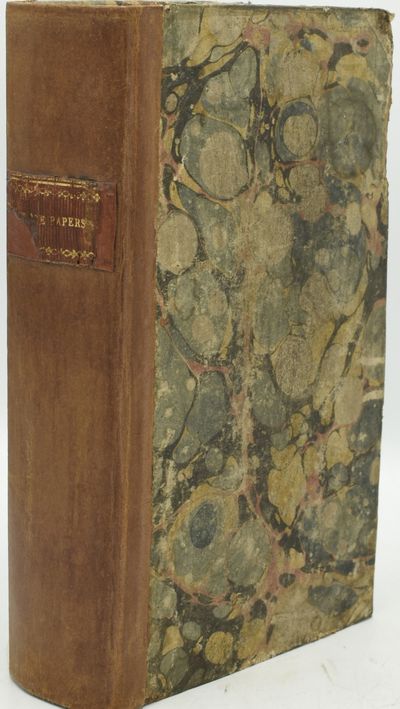 by [Thomas Jefferson] | [General James Wilkinson]
[Washington, D.C.]: [Government Printers], 1808. First Editions. Hard Cover. Very Good binding. An important sammelband of senate pamphlets from 1807-08, with several of interest regarding the Burr-Wilkinson Conspiracy: (1) Message from the President [Jefferson] Touching on the Official Conduct of Brigadier General James Wilkinson (1808); (2) Deposition of Daniel Clark, the Delegate ... from the Territory of Orleans in relation to the Conduct of General James Wilkinson [Streeter, lot 1688]; (3) A Plain Tale supported by Authentic Documents, justifying the Character of General Wilkinson ... By a Kentuckian [Streeter, lot 1685], and (4) Further Information and Papers Relative to Brigadier General Wilkinson. In addition to these, there are 45 other pamphlets.~The pamphlets were gathered by Senator John Smith of Ohio, with the Senator's signature on the preliminary title page and the final pamphlet published on the 25th of April, 1808, the day Smith resigned due to the political fallout from his involvement in the Burr Conspiracy in which he had become embroiled (he had agreed to provide Burr with supplies for his expedition to the Florida territories). Soon after the Senate convened in late 1807, members opened an investigation into Smith's conduct, led by John Quincy Adams. Though he avoided expulsion by the narrowest of margins, Smith took this as the loss it was, and resigned his post on April 25, 1808~Altogether a representative gathering of reports relating to significant events in the early days of the Republic -- not only the Burr-Wilkinson debacle, but the Embargo Act, privateers and Barbary Pirates, General Hull at Detroit and other matters.~~~~ (Streeter 1685; 1689). Very Good binding. (Inventory #: 289553)
$8,500.00 add to cart or Buy Direct from
Black Swan Books
Share this item

HISTORY OF THE HONOLULU ENGINEER DISTRICT 1905-1965