RESOLVES OF THE GENERAL ASSEMBLY OF THE STATE OF MASSACHUSETTS-BAY, BEGUN AND HELD AT BOSTON, IN THE COUNTY OF SUFFOLK, ON WEDNESDAY THE 28TH DAY OF MAY, [BEING THE LAST WEDNESDAY IN SAID MONTH], ANNO DOMINI, 1777; AND THENCE CONTINUED BY ADJOURNMENT, AND HELD BY SPECIAL SUMMONS OF THE HONORABLE MAJOR PART OF THE COUNCIL, AT BOSTON AFORESAID, ON TUESDAY THE FIFTH DAY OF AUGUST FOLLOWING, BEING THE SECOND SITTING OF SAID ASSEMBLY 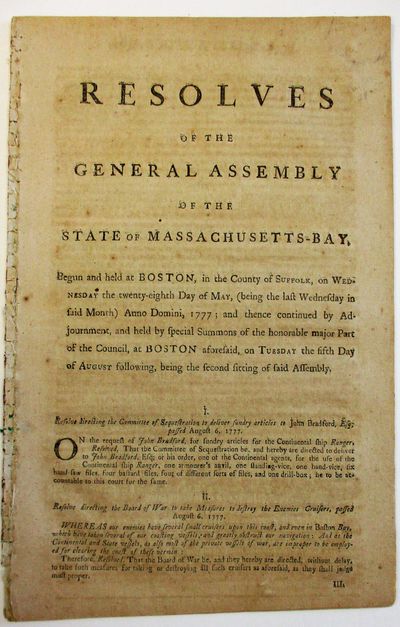 The Resolves-- from August 6 - August 16, 1777-- treat Revolutionary War matters exclusively. The Assembly instructs the Board of War to "destroy the Enemies Cruisers which have taken several of our coasting vessels"; orders that two armed vessels be built, firearms be distributed, the expedition to St. Johns be abandoned; troops be raised and "every sixth Man from certain Counties" be drafted, "the loss of the important Fortress of Ticonderoga" having advantaged "our cruel and inveterate enemies"; orders exchange or return of defective gun powder to the Overseers of the Powder-Mills; proclaims a day of public fasting and prayer; resolves to complete "this State's quota of the Continental army", Quakers excepted; and other significant matters.
FIRST EDITION. Evans 15415. ESTC W33210 [AAS, Boston Public, CA State Lib., HSP, Syracuse]. (Inventory #: 36321)
$650.00 add to cart or Buy Direct from
David M. Lesser, Fine Antiquarian
Share this item
David M. Lesser, Fine Antiquarian Books LLC
Offered by