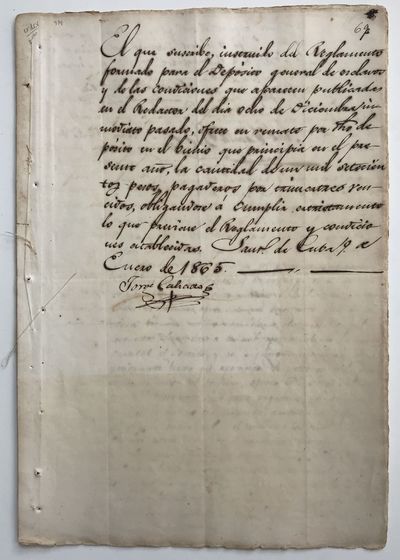 by [Cuba]. [Slavery]
[Santiago de Cuba, 1865. Very good.. [10] leaves. Removed from a larger volume and restitched. Minor wear and one small area of worming at edges. Light tanning and foxing. Accomplished in several legible hands. A fantastic set of manuscript records for a slave auction house, the General Slave Depository in Santiago de Cuba, dating to January 1865. Santiago, along with Havana and Cienfuegos, was one of three major sites for slave sales on the island during the 19th century. The first leaf of the document provides a statement that the documents were assembled in accordance with the rules established for slave auctions, which had been updated and approved at the end of the previous year. The second two documents lay out mortgage agreements and financial obligations between the slave house and the Real Sociedad Economica de Amigos de Pais of the city, in which the auction owners acknowledge debts and forthcoming payments on the order of several thousand pesos. Following these are two leaves containing a "Relacion de los esclavos ecsistentes en el deposito de esta Ciudad en el dia de la fecha," that is, a list of slaves at the depository on the day of the auction and their owners and renters, which perhaps were a part of the collateral for securing the loan. A total of twenty-nine slaves are listed, and the leaf that follows certifies that the list is correct according the to the director and the auctioneer of the depository. The final two leaves provide official recognition of the loan from two distinct government offices. All documents are signed by the relevant parties and government officials involved in the agreement. In all, the present group of documents provides a detailed assessment of debts and (human) assets of the slave auction house in Santiago de Cuba in the mid-1860s, and is a fascinating and valuable document of the bureaucracy and regulation surrounding the financial realities of selling slaves in Cuba during this period. (Inventory #: 974)
$3,750.00 add to cart Available from
McBride Rare Books
Share this item