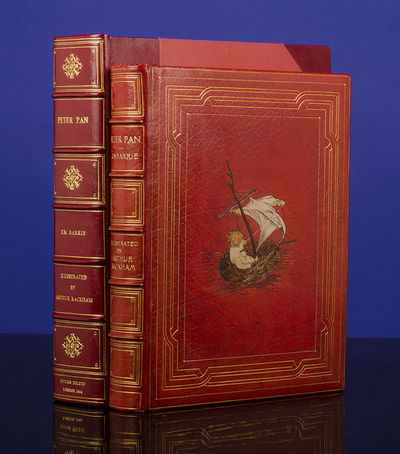 first edition
by BAYNTUN-RIVIÈRE, binder; RACKHAM, Arthur, illustrator; BARRIE, J.M.
London: Hodder & Stoughton, 1906. Limited Edition of Arthur Rackham's "Peter Pan in Kensington Gardens" In an Early Inlaid Binding by Bayntun Rivière  BAYNTUN-RIVIÈRE, binder. RACKHAM, Arthur, illustrator. BARRIE, J.M. Peter Pan in Kensington Gardens (From "The Little White Bird"). With Drawings by Arthur Rackham. London: Hodder & Stoughton, 1906. Edition DeLuxe. Limited to 500 copies, this one 'out-of-series', unnumbered and unsigned. Large quarto (10 1/8 x 8 1/2 inches; 258 x 216 mm.). xii, 125, [1] pp. Color frontispiece and forty-nine color plates (collected at the end of the text) mounted on heavy brown paper, with descriptive tissue guards. Four black and white drawings (two on the title and one each on p. 1 and p. 14). Slight crease to lower right-hand corner of fifteenth color plate, two tiny rust marks just affecting lower corners of pp. 81-84, otherwise fine. Bound ca. 1940 by Bayntun (Rivière) Bath in full red crushed levant morocco. Front cover elaborately decorated in gilt 'pointille' surrounding an inlaid design in multi-colored morocco of the frontispiece "There now arose a mighty storm and he was tossed this way and that". Lower cover with identical gilt pointille decoration. Spine with five raised bands, decoratively paneled and lettered in gilt in compartments. Gilt board-edges, decorative gilt turn-ins, red Cockerel endpapers, all edges gilt. Front joint expertly and almost invisibly repaired. Housed in a felt-lined, half red morocco clamshell case, spine with five raised bands, decoratively tooled and lettered in gilt in compartments. J.M. Barrie's novel The Little White Bird (1902) "contains the first sketches for Peter Pan. The narrator is 'a gentle, whimsical, lonely old bachelor', an author by profession, whose ambition is to have a son. He meets a penniless young couple whose own son David becomes a substitute in his affections. He explains to David that 'all children in our part of London were once birds in the Kensington Gardens; and that the reason there are bars on nursery windows and a tall fender by the fire is because very little people sometimes forget that they no longer have wings, and try to fly away through the window or up the chimney.' The central chapters of the book tell the story of one such child, Peter Pan, who 'escaped from being a human when he was seven days old...and flew back to the Kensington Gardens'...The Peter Pan chapters of The Little White Bird were re-issued in 1906 as Peter Pan in Kensington Gardens, with colour plates by Arthur Rackham; this was the book which first made Rackham's work famous. It should not be confused with Peter and Wendy (1911), Barrie's novelization of the play Peter Pan" (The Oxford Companion to Children's Literature). Latimore and Haskell, p. 27. Riall, p. 74. (Inventory #: 04722)
$4850.00 add to cart or Buy Direct from
David Brass Rare Books
Share this item

Love-Lyrics & Songs of Proteus, The