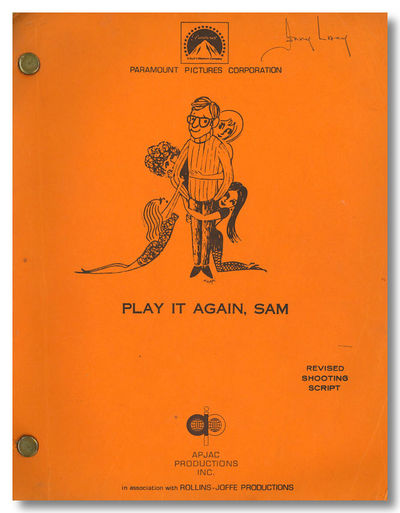 by Allen, Woody [sourcework & screenwriter]
[Los Angeles]: Paramount Pictures / APJAC Productions, 1971. [1],120 leaves. Quarto. Mechanically reproduced typescript, printed on rectos only of white, salmon, and green stock. Bradbound in printed studio wrappers. Ink name on upper wrapper, a few notes on title and scattered in text; very good. A "revised shooting script" of Allen's own film adaptation of his 1969 play. Charles Grodin had written at least one draft of an earlier adaptation for the same production company. This copy includes dated revises on colored stock spanning 20 - 27 September. The film was released in May 1972, was directed by Herbert Ross, and starred Allen, Diane Keaton, Tony Roberts, Jerry Lacy, Viva, Joy Bang, et al. This copy bears the ink name "Jerry Lacy" on the upper wrapper (he played Bogart in the film) and contact info for Joy Bang and other annotations in the same hand. Actual pre-production scripts by Allen or for films based on his sourceworks tend to be rather uncommon, their circulation being largely confined to those actually involved directly in production. (Inventory #: WRCLIT82971)
$1,500.00 add to cart or Buy Direct from
William Reese Co. - Literature
Share this item

THE SECRET LIFE OF SALVADOR DALI

New York : The Dial Press , 1942
(click for more details about THE SECRET LIFE OF SALVADOR DALI)

WALT WHITMAN, SCHOOLMASTER: NOTES OF A CONVERSATION WITH CHARLES A. ROE, 1894 [caption title]

by [Whitman, Walt]: Traubel, Horace, and Charles A. Roe

Philadelphia : Walt Whitman Fellowship Papers: 14 , 1895
(click for more details about WALT WHITMAN, SCHOOLMASTER: NOTES OF A CONVERSATION WITH CHARLES A. ROE, 1894 [caption title])
View all from this seller>