The Man Without a Country. 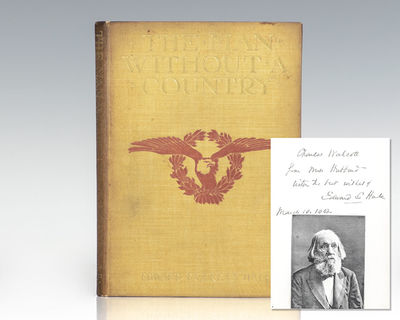 by Hale, Edward Everett
Boston: Little, Brown and Company, 1898. Early printing of Hale's classic short story. Octavo, original cloth with gilt titles to the spine and front panel, stamped bald eagle vignette to the front panel, illustrated with engravings including tissue-guarded frontispiece. Presentation copy, inscribed by the author on the second free endpaper, "Charles Wolcott from Mrs. Hubbard with the best wishes of Edward E. Hale March 10, 1902." With a photograph of the author tipped in beneath the inscription. In very good condition. First published in The Atlantic in December 1863, Edward Everett Hale's The Man Without a Country is the story of Philip Nolan, an American Army lieutenant who renounces his country during a trial for treason and is consequently sentenced to spend the rest of his days at sea without so much as a word of news about the United States. Hale published the story to bolster support for the Union in the North. By frequently mentioning specific dates and places and using numerous contemporary references, Hale skillfully convinced many readers that Nolan was an actual figure, thus increasing the story's effectiveness as a piece of patriotic literature. (Inventory #: 105108)
$975.00 add to cart or Buy Direct from
Raptis Rare Books
Share this item